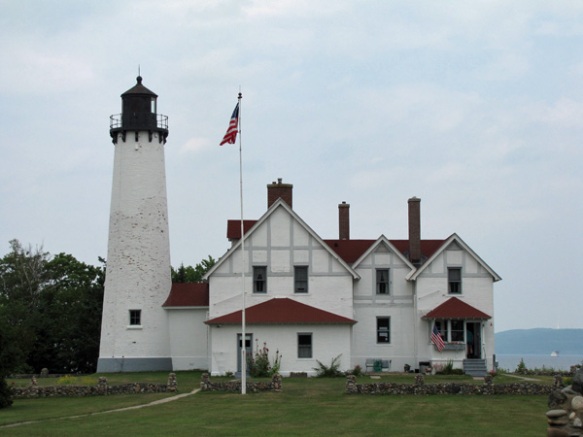 Yesterday, Anne bicycled from the old cabin to the Point Iroquois lighthouse. On the way, she stopped at the Dancing Crane coffee shop and bought a half-pound of beans. She cruised by the two casinos and one of two historical Native American burial grounds. Walking around the lighthouse grounds, she spied the following sign:

Without a valid permit

With its special designation, we ask that you leave all features as they are:

I guess that the prohibition against relocating rocks from the beach could also include the time-honored practice of throwing rocks into the water. If this prohibition is just going up now at Iroquois, I wonder how much longer before the Whitefish Point lighthouse follows suit? Oh by the way, when I rode to the lighthouse with Anne, earlier this summer, I noticed a small sign just outside the burial grounds. It said that the use of metal detectors in this area is prohibited. 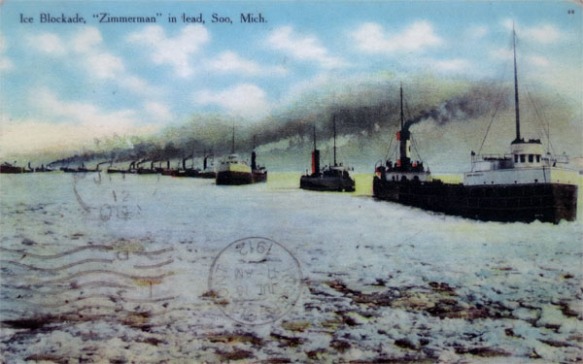 The lighthouse keepers log books often mention vessels delayed or stuck in the ice at the start of the spring shipping season. This postcard shows ore carriers in a Whitefish Bay spring “ice blockade” around 1910. The above photo and the following picture are both displayed on placards in an informational kiosk.

The ship Cliffs Victory was originally built in 1945 as a WW II “Victory ship”. She was later lengthened and reconstructed for Great Lakes use in 1951 and for a while was the fastest bulk freighter on the lakes. It was eventually dismantled for scrap iron in Korea, in 1987.

Today was a day for errands and chores. That’s not to say we didn’t get a little bike ride in first, because we did. First thing this morning, we bicycled in Forest Park. This early morning ride allowed us to beat the day’s heat, but we were definitely not alone, the park was very crowded at that hour. Everyone one else wanted to beat the heat too. The errands and chores that we accomplished today were in preparation for our summer vacations. We first gathered and then packed our camping equipment. I put new tires, tubes and brake pads on Anne’s bike and I got my hair cut. After our ride, while I was busy in the basement, Anne was feverishly working upstairs on her latest quilting creation. I cannot disclose much about this project, because it is going to be a present, but the portions of this quilt that have already been completed look quite spectacular.

Antiques, an Elephant and a Really Big Boy with a Twistee Treat

We rode the middle route of Trailnet’s Route 66 bicycle ride today. This ride was a lot easier than the Great Pizza ride of two weeks ago. There were almost no hills and the wind was hardly noticeable. We drove to Edwardsville, IL, which was holding its annual Route 66 festival. From there we looped north, riding on parts of historic Route 66 and also some Madison County bike trails.

The Pink Elephant Antique Mall was certainly the highlight of this ride for us. This antique mall adjoins I-55 in Livingston, IL. I-55 has usurped the Mother Road’s preeminence is this part of Illinois. We’ve driven by the Pink Elephant countless times on runs to Chicago and beyond, but we’ve never bothered to stop at it, while we were whizzing down the interstate in our automobile. The slower mode of locomotion that bicycling affords lends itself to the kinds of attractions that were the regular fare, when Route 66 was in its prime.

The Pink Elephant may have been the highlight of this ride, but it certainly wasn’t its only attraction. The farmers are slowly, but steadily getting the corn crop in the ground this year. With all of the rain that we’ve received, it has been difficult for them to find enough dry time, to plow and plant. While most of the corn is only ankle high, a few fields are more than knee-high. I give those fields the best chance to be as high as a pink elephant’s eye, by the Fourth of July. But considering the wizardry that is occurring at Monsanto these days, I wouldn’t count out any of the planted fields that we saw today, in their race for the height of an elephant’s eye. While almost everything is quite green, there were some fields of weeds that were grey and desiccated. I figured that they had been sprayed with Round-Up and were now ready for tilling and planting.

We saw a lot of storm damage from last weekend’s storms. One farm had all of its trees ripped to shreds and a large multi-story corrugated storage bin lay crumpled and twisted on its side. The farmer was busy burning the downed limbs in a huge bonfire in the back, while his children ran about playing in the driveway. That must have been one scary night for them. When we got back to Edwardsville, we came in on a bicycle trail. It was completely cleared, but you could see all of the scuffing and scrapes that the workmen and their heavy equipment did to the trail’s asphalt pavement. Most of this work was needed on sections of trail that ran along the raised bed of the old railroad line. On either side of this earthen trestle countless trees lay fallen, either snapped like twigs or hacked into submission by chain saws. Last weekend we encountered some storm damage on the bicycle trails on Edwardsville’s southeast side. Today’s storm signs were on the northwest side and they were way worse.

To end on a happier note, we did see a couple of other oddities and they were almost adjoining each other. One was like a Noah’s Ark farm. It had miniature ponies, llamas, emus, donkeys, goats, sheep, ducks, geese and who knows what else. Just down the road a bit was a house, whose yard was filled with handmade lawn art, punctuated with political and religious signs. One sign said, “Make Chicago a State”. Downstate Illinoisans don’t appreciate the fact that greater Chicago’s much greater population rules politics in the state. The lawn art also had a Noah’s Ark feel. Most of the sculptures were of animals that might have been on the Ark. That is except for one pair, a pair of dinosaurs. One of this pair lay stricken on the ground, while the other hovered over it. I guess that is one explanation of how and when the dinosaurs went extinct. 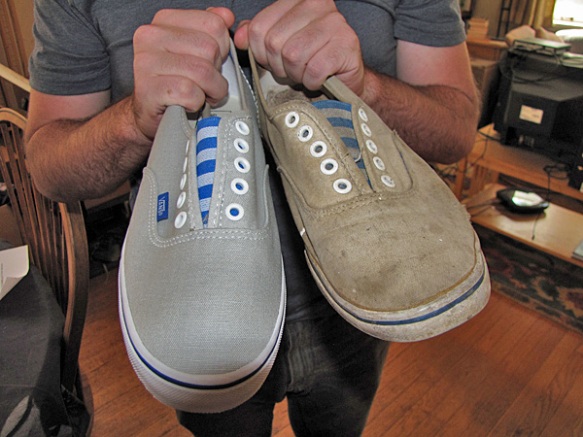 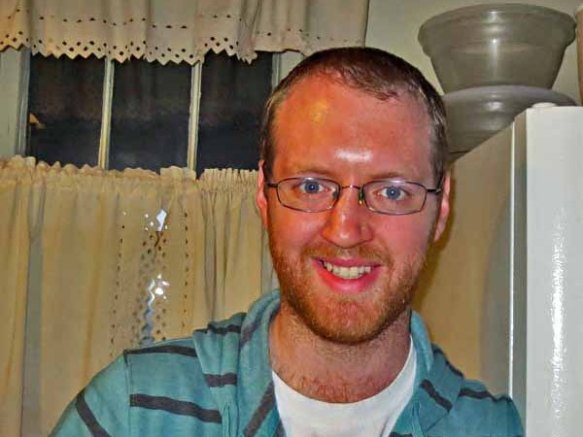 Dave Is Back In Town For Mothers Day

Dave arrived in town on Friday afternoon. He came back home to celebrate Mothers Day, but he also had to license his car. I took the afternoon off to see him, but then I got greedy and tried to sneak a bike ride in too. I was at the far end of the park when he got home earlier than I expected. By the time that I made it back home, he was gone. He had left his car at Telle Auto, for a state inspection and then walked over to his friend Kennard’s. Later Anne called; she was at the Wood, waiting for the rest of the teachers to show up. Telle called then, the car had passed and was ready for pickup. I walked over to Telle and then drove it to the licensing bureau. I was waiting there when Dave called; he was back at Telle, wondering where his car was. I told him where I was and that I was headed to the Wood. He asked me to call him, when we left the Wood.

Anne and the rest of the testy testing team were there, when I finally arrived at the Wood. They have just completed this year’s standardized tests, leaving no child left untested. This being Teacher Appreciation Week, these teachers were appreciating most of all a Friday afternoon libation. At the beginning of testing season, the signs on the doors read, “Testing, Do Not Disturb”. By the end, some wag had altered the signs to read, “Disturbing, Do Not Test”.

We called Dave on our way home, but got no answer. Dave eventually showed up, stayed for a few minutes and then was out the door again. He was not seen nor heard from again until like a vampire count, he came crawling back to his coffin among the morning shadows of dawn’s early light. The sound of his key in the door caused Anne to wake with a fright. She thought that someone was breaking into the house. Kennard is now the manager of a miniatures store. He, Dave and a couple of their friends had been playing war games there all night long. The acorn has certainly not fallen very far from the tree.

On Saturday, Anne and Joanie disappeared to the Laumeier Mothers Day art fair. When the boys were growing up, this was one of Anne’s usual opportunities to step out. Since the one boy in town was ‘napping’, I busied myself with chores and another bike ride. Returning home again, I found Dave sprawled across the couch, but conscious. I suggested going out for lunch, which he was up for. I took him to Gringo, the same place that I had taken Anne for her birthday. Our other son Dan is much more forthcoming about his doings than Dave is; Dave is just naturally more reticent. We like to joke that we are just not cleared to his comings and goings. Taking matters in hand, I decided to employ extraordinary means of interrogation, not water-boarding, but rather a pitcher of margaritas. Gringo makes a potent margarita.

Since he was last home over Christmas, the boy has been busy. Over spring break he did a whirlwind tour of America’s major metropolitan areas: Boston, New York (He tried to see Ashlan.), Washington and Chicago. It turns out that Dave was arriving in Chicago about when we were leaving. He drove to these cities with two guys who will become his new roommates in the fall. They’re both undergraduates, but both Dave’s age. They’re Indiana boys who came to Purdue via the Marine Corps. Dave has been rooming the last two years with two Asian Indian graduate students. One of these guys is graduating, while the other is studying in Switzerland. Future travel plans include a week’s vacation in Costa Rica, followed by a conference in Montreal and the cabin on the 4th. 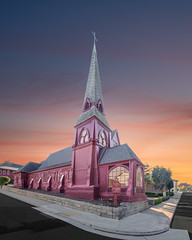 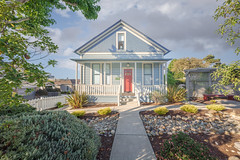