The photo with this post shows a sunrise instead of the usual sunset over Lake Superior. The reason for this is that it was taken on the opposite side of Whitefish Bay, in Paradise, MI. There wasn’t a sunset last night, here in Saint Louis and not much of a sunrise this morning either. The reasons for this were thunderstorms. Last night, I barely made it home from work, before the heavens opened up. Things calmed down after that as the boomers moved east across the river, but around 3 AM the flash-bang of a nearby lightning strike startled both Anne and I wide awake. It was so close that there was almost no separation between the flash and the bang. Our power was knocked out, but for less than a minute and after it came back on, we started unplugging electrical appliances. Sort of closing the barn door after the cows had left. Fortunately, nothing was damaged. Although after that bit of excitement, we both had trouble getting back to sleep and when the get-up alarm went off, we were both feeling rather sleep deprived. An amazing cold front had passed over the Lou. Today’s high was only in the low seventies and tonight’s low is expected to be in the fifties, both a full twenty degrees below our normal temperatures. The air conditioner is off, for the first time in a month. The windows are open and as I write I can hear the voices of small children playing outside. It ought to be good sleeping weather tonight, with the sun once again rising in paradise in the morning.

Tonight was another Science on Tap night and like the last one, it was another astronomy talk. The Schlafly Bottleworks hosts these monthly events in conjunction with Washington University. It makes for a nice combination of Schlafly beer and WashU brains. Joanie organized this outing for all of us and her college friend and my current colleague, Pat, made it four of us, along with Anne and I. The speaker was William B McKinnon. His talk was billed to be about our outer solar system.

This event will go on for some time, so, I won’t be able to post anything until much later, after it is over, but I’m sitting here two-hours before the event, just marking time. It is so popular an event that you have to get a seat that early. Did I mention that it is free? So, while I’m sitting here wanting to write, but not being able to write about Science on Tap, because it hasn’t happened yet, let’s change the subject.

Lake Superior or originally Lac Supérieur in French, meant not the best of the Great Lakes, as is so often claimed nowadays, but the uppermost of them. In the French or Spanish manner, lakes are referred to as Lake Something as opposed to the English manner, Something Lake. Lake Superior sounds more impressive than Superior Lake. In modern times, some people have adopted the affected Lake Something convention, because it sounds more cultured.

While he was an excellent speaker, I found Bill McKinnon’s talk less than inspiring. I felt that he spent way too much time backfilling planetary astronomy’s ancient history, meanwhile scant attention was paid to what is currently going on. The New Horizons space probe is slated to make closest approach to Pluto this year on Bastille Day. This coincidental date is all that correlates most of McKinnon’s historical prologue to what is really going on now this year. I wanted to know what was happening next, not what has already occurred. I could have read all of what McKinnon said on Wiki. The contrast in quality Science on Tap talks couldn’t have been more stark, than between this talk and the previous Mars rovers Science on Tap. 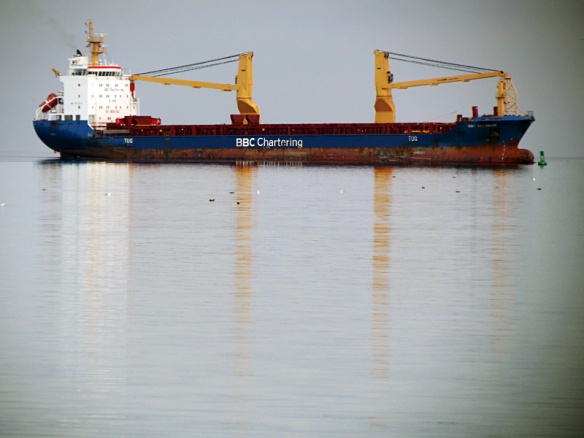 Pictured is the BBC Delaware. In the parlance of boat nerds, it is a salty. It is as of my last check off the western coast of South Africa, having just round Cape Horn. It is pictured here on Lake Superior, passing Anne’s cabin on a calm day.

Last summer, Lake Superior was unusually cold, what with the preceding winter’s artic vortex and what not. I know this, because I swam in it in early July. Even in August, the water temperature was still cold enough to claim victims, two wedding party guests had to be rescued when their sailboat capsized. One of them had to be hospitalized.

Nowadays, no one has to swim or bathe in the lake if they don’t want to, especially, if it is as cold as it was last year. Seemingly, all of the cabins now sport hot water heaters, but back in the day, when I first joined Anne on her annual migration north, indoor bathing involved lots of tea kettles on the stove. I first arrived after the wood stove era, even if one was still sitting inert in the kitchen. Everything was all very modern back then, what with an electric stove. If one wanted to bathe indoors, you had to boil water on the stove, just to take a pit bath. Fortunately, for me my summer vacations back in the day were warm enough to support public bathing out in the lake.

This week, Anne and I got the chance to revisit yesterday’s pit baths of yore. On Sunday, our hot water heater went belly up. I called Bill, who had installed the now defunct water heater some 21 years-ago. I think that the number that I called, which was handwritten on the old tank had become a personal number in the intervening years, because his wife Mary queried me on how I had gotten it. He came out on Monday and sized up the problem. Tuesday, he installed the new water heater. Anne and I contracted all of this labor while trading off between doctor’s appointments. I wish that like my 80 year-old dad still does, I could replace my own water heater, but he gets a lot more practice doing this than I ever would. His water heaters typically last less than ten years.

At one point in this endeavor there was some confusion, when Anne referred to our 21 year-old water heater as the new water heater. In truth, she was right. Compared to the 37 year-old furnace that came with the house and that we had just replaced, a couple of years ago, this was the new water heater that we had bought after we had purchased the house. It is the first house, as opposed to household, appliance that we have had to replace twice. The last household appliance that we have left to replace again is our stove, which is up next. I’m going to budget for a new-new air conditioner next, one of those huge new super high-efficiency ones, because our new AC unit is now getting long in the tooth. 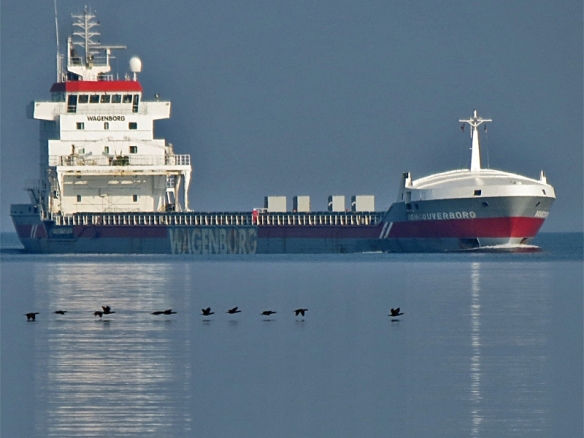 Today, I got a writing assignment. This term paper must be fifteen pages in length, not fourteen nor sixteen, but fifteen. Oh, and it’s not due for months. I had been assigned this work before I went to Seattle, but what with the trip and then post-processing of my results, I’ve been putting it off. That changed today and I ended up spending most of the afternoon being a wordsmith. You see, the paper is pretty much written; it just needs a little more polishing. I had lots of help. I was one of five guys who spent all afternoon on it, deciding by committee matters of grammar, syntax and content. We took numerous votes on instances of all of these aspects of writing and we didn’t even make it through what we had planned on getting done. It’s going to be a long hot summer.