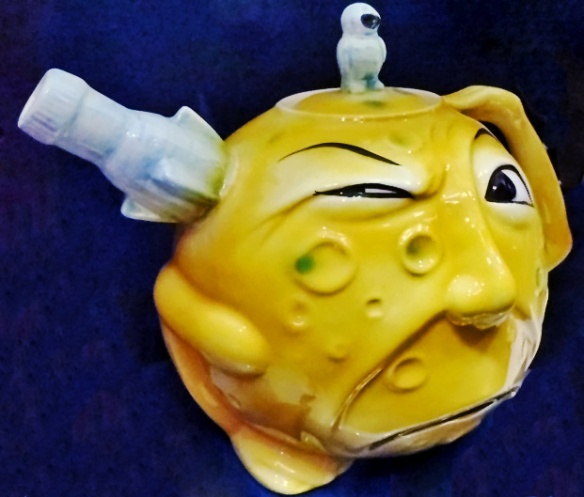 A couple of weeks ago, there was an article on Slate, where the author had assembled a list of books that sequentially counted up to 101. Since then, I’ve tried to go back to Slate and find that article again, but to no avail. Instead, I decided to replicate that feat, substituting movies and an occasional TV show for the original book list. I’m not as ambitious as the original author, so I only counted up to fifty. Like the other list, I chose One Flew Over the Cuckoo’s Nest to start with. The other author was also strict in adhering to the rule that each iteration’s number be at the beginning of the tittle. I started off that way, but decided to eventually deviate from this rule, choosing more notable titles over less well-known ones that happened to conform better. The black text movies are ones that I’ve seen, while the grey text ones are just fillers. Apollo 13 relates to the teapot photo above, from the Science Center and also Anne’s day today.

Anne and Joanie went to the circus today, Circus Flora, which is based here in Saint Louis. Every year, Circus Flora has a story that ties together its various circus acts. This works much like with musicals, whose threadbare plots are only just strong enough to tie together the shows various musical numbers. This year’s story is based on of the 1902 Georges Méliès film, A Trip to the Moon. Its most memorable sequence is a shot of the Man in the Moon, or at least a man in a coconut creme pie, getting socked in the eye, by a spaceship from Earth. Sorry Georges, I couldn’t include your title in the list, because there were no numbers in it. So, I substituted Ron Howard’s Apollo 13 instead.

Friday night Joanie and Pat treated us to a night at the museum. The impetus for this outing was the opening of the Science Center’s new “Lost Egypt” exhibit. This exhibit is composed of about half modern and ancient materials. It has an interactive sculpture of a kneeling camel set before a desert backdrop that can be climbed on for a great photo. Unfortunately dear readers, I couldn’t convince Anne to cooperate, so there will be no picture for this blog. The exhibit includes one mummy, nicknamed Annie. Annie was a girl, 16-18 years-old, who lived in ancient Egypt around 220 BC.

The mummy mystery alluded to in this post’s title began when I asked a young docent, if this was the same mummy that I had seen almost thirty years ago, when what eventually became part of today’s Saint Louis Science Center was then the Museum of Science and Natural History in Clayton’s Oak Knoll Park. Oak Knoll Park was in easy walking distance from our house and when the boys were small, we would walk over there together. I remembered seeing a mummy exhibited there in the 1980s.

The docent didn’t look old enough to have been alive in the 1980s let alone be working at a museum, but she knew that this exhibited mummy couldn’t have been that, because it is on loan from Philadelphia for this show. She knew of one mummy that the Science Center does own, a 7 or 8 month-old boy who is currently on display at the entrance to the Omnimax Theater. She called for backup. A somewhat older curator appeared. I told her where and when I had seen the mummy and then described that exhibit. The sarcophagus was in a glass display case at eye level, while the mummy itself was located directly below the case, on the floor below and could only be viewed through a Plexiglas window in the floor. This curator was stumped too, so she called for backup again. The next curator was as mystified as the rest, but took my name and email, so that someone even more knowledgeable could contact me later.

I later related this story to Anne, who thought that I had misremembered some Chicago exhibit. I knew that I wasn’t, so this morning I jumped on the Internet to do some research. The Internet is a wonderful thing, but it does have its limitations. One of them is that it didn’t really exist in the 1980s, at least not in its current form. I did learn that Washington University owns three mummies, two of which are on currently on loan to the Saint Louis Art Museum. One of these is considered a rare find. One of the three mummies was briefly lent to the University of Missouri, Columbia in the 1980s. So, I was able to establish that there were multiple mummies moving around town during the time in question. I finally found a PDF that described the so-called Mormon Mummies, New Light on Old Egyptiana: Mormon Mummies, written by Stanley B. Kimball in 1984. These are mummies that passed through Saint Louis around the time of the Civil War. They were soon sold and moved to Chicago. This treatise went on to describe more of Saint Louis’ mummy history, page 77:

Mystery of the mummy solved. I feel so vindicated. Thank you Google. 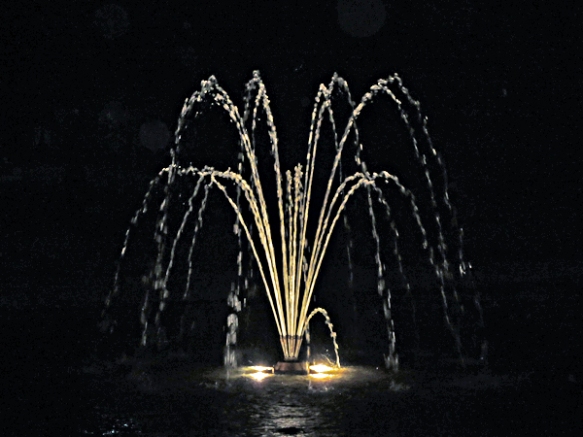 Oak Knoll Park is the closest park to our home. When the boys were young it was the go to place for open green space and playing outside. It even has a nice little playground. It is a Clayton city park, so we’ve always had to cross Clayton Road to get to it. This has led to a few heart stopping moments over the years.

There are two large houses in the park. These were once the private residence of two brothers. The large tyrannosaurus and triceratops figures that now reside outside the McDonnell Planetarium lived here, back in our own little Jurassic age. One of the two buildings was open to the public, it served as the Saint Louis Natural History Museum. When the Science Center expanded to the south side of Highway 40, the dinosaurs left, along with the Natural History Museum.

At the bottom of the knoll that contributes to this park’s name it a small pond. Anne always enjoys searching for turtles in the warmer months. Once there was a rather large stainless steel sculpture that was designed to rotate, so that it was always facing the sun. Its motion didn’t last long, but the sculpture hung on anyway. Now, it has been replaced with the pictured fountain. I went for a walk this week and snapped this picture.

Under the rubric of Anne teaching Pooh, I have another story for you. Anne passed out different colored slips of paper to her fourth grade class this week. Written on each slip were sentences from “Winnie the Pooh”. Students with the same colored slip were asked to order the sentences written on each slip correctly. After they had deliberated, Anne queried one of the groups, “Which slip should be first?” One young boy piped up that it should be his. Next Anne asked, “How do you know this?” He explained that his slip had the extra wide top margin that you would expect to see at the top of a page. That’s thinking outside the box.

Wednesday night was the big Powerball drawing. For the record, I bought a single ticket and I did not win. There were two winners and one of the winning tickets was sold in Missouri. That was all that was announced until later in the day. Thursday morning, the question on everybody’s mind was who was not there at work. I made the joke that the IT department had won, which elicited the desired sour expression among the gathered throng. Later I passed by the IT room and the door was locked. I had my own little sinking spell there and then. Later still I found the IT group. They were all losers like me, holding on to their day job.

The first Friday of every month, the James S. McDonnell Planetarium hosts free outdoor stargazing and a planetarium show. Christian, a friend from work, reminded me about these events and Anne and I ended up going tonight. We saw Christian and met his family there. Although the moon was a little too full for good stargazing, the clear Saint Louis skies and balmy temperatures that had topped 70 °F in the afternoon, made this too good an opportunity to miss. Several, large telescopes were erected on the archery field, which fortunately was not in use. I got to see Jupiter and its moons and Anne saw Venus too.

Everyone trooped into the planetarium next. Gone was the high-backed cushy theater seating of memory. In its place were a few rows of stackable chairs and stacks of floor mats. We should have snagged a couple of floor mats, but elected the chairs instead. The picture of the planetarium projector looks to me like a cross between one of Dr. Who’s Daleks and a Sentinel from “The Matrix”. It took me a while to figure out that the stars in the projector picture are refractions off the many lenses, from the camera’s flash.

The planetarium speaker had a very soothing voice and we were in the dark for about an hour, so maybe not choosing one of the mats was a good idea. More than a few proto-engineers and proto-scientists fell prey to his discussion of proto-stars. Afterwards, we had Thai satay chicken pizza in the Loop. Dinnertime conversation was a bit lax, what with the two of us, still being lost in space.

Star Light Star bright,
The first star I see tonight,
I wish I may, I wish I might,
Have the wish I wish tonight.

Error: Twitter did not respond. Please wait a few minutes and refresh this page.