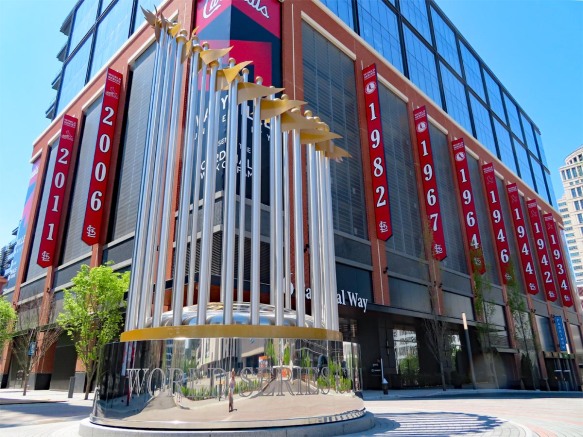 Well, so much for hanging out close to home. We were only going to do our now regular Forest Park’s closed roads and golf course walk, when while dropping off a letter at the drive-by post office post box, we had an epiphany. Why not go downtown and checkout the new-old World Series trophy statue? So, this is what we did on Saturday. We haven’t driven the new RAV4 more than a mile or two from home for months now, so this eight mile jaunt to the river felt a bit like a road trip. Heading there, I figured that this novelty would be mobbed with so many other people that we had no hope of ever safely getting close to it. I was wrong, we had it all to ourselves. Oh by the way, the first two title years are around the corner of the building.

I had forgotten that on a weekend, excepting the occasional summer festival or a Cardinals game that the downtown is always pretty much a ghost town. There have been changes though. This trophy replica is sort of the crowning statement on a Cardinal’s long ago made promise. In order to secure government financing for the current Busch Stadium, they promised to transform the land where the old Busch Stadium stood into a multiuse venue dubbed Ballpark Village. It was supposed to encompass restaurants, shops, offices and apartments. The Cards got paid, they got their new stadium and then the Great Recession hit. For a long time Ballpark Village was just a fenced in grass field. It has been a long time coming, but the Cardinals have finally kept their promise and work on Ballpark Village is almost complete. Imagine owning a condo with a look-down view from straight away center, while sitting out on your balcony.

There has been some grumbling in town from sports purists at the hubris involve in erecting such a monument to past glories. Comparisons have been made to the hubris of the Cubs, when they installed a jewelry store near Wrigley Field, ready to dispense future World Series championship rings that never came. I say, this is a year to revel in past glories. The present has little to offer and the future is uncertain. For some reason they are replaying a football game on TV tonight. When has there been football in May? Keep your pearl clutching to yourselves.

We decided to walk the grounds of the Arch. We repositioned the car closer and negotiated the parking meter app for the first time. Kiener Plaza had been done over, since we last visited it. The old courthouse was of course closed as were the Arch and its museum, but their grounds were open and we had not explored them since the Arch’s major renovation. We were both impressed. Today was an especially warm day, almost a record, so we didn’t last long down at the Arch.

Other sights that we saw downtown included a motorcycle club that had taken over a block of Broadway. No ten person max rule there. There was so little traffic downtown that I could pretty much cross any street at will. Pretty much. Another new sight downtown was not one, but two homeless tent encampments. They had been setup in the park around Soldier’s Memorial. One of them was across the street from City Hall. Finally, site prep for the new professional soccer stadium is well underway, to be located just west of Union Station. 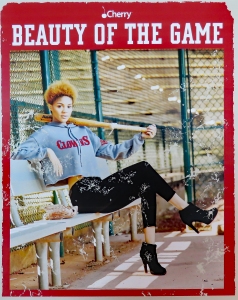 Beauty of the Game

Hey Big Boy, let me see you swing that bat… This pictured poster is from the Negro Baseball League Museum in KC. Speaking of baseball, we are now moving into late April and the Cardinals have yet to lose a game. Even better though, the Cubs have yet to win one. I’ve also noticed that my YouTube feed of recommended videos has classic ball games featured now. That’s new. I guess this year is the season of past glories. Speaking of past glories there is a new  gigantic replica of the 2011 Cardinals World Series trophy that I want to see.

It is downtown and I think we can safely do a drive by, to check it out. Thinking of baseball, I am of course reminded of our biggest baseball fan, Carl. On our daily walks there is a new yard sign that has garnered amazing currency and also reminds us of him. It reads, thanks to everyone who is working in harms way. ♥

Moving on—It is not often that I get verklempt while reading the mail. At the risk of TMI, I routinely get the mail wearing only my boxers. I’ve read that in some communities, men fetching the mail, without wearing pants is a problem and that the police have been alerted to this issue. Rest assure dear people there is no public lewdness involved in our mail delivery. The mail person places the mail in the mail slot, in the front wall of the house and upon hearing this, after waiting a minute, I get up off of the couch and retrive the newly placed mail through our interior mail slot door. It is really all quite proper, so don’t worry.

Anyway, back to my verklempt moment with the mail. Bill, junk, bill, a letter to Anne from the county election commission. Oh, no. Previously, I had implored Anne not to work the polls. Our next election is scheduled for June. It was originally scheduled for this month, but well, you know. So, my heart sank, until I turned to the next piece of mail. It also was the election commission’s, but was addressed to me. Opening it, I found a letter and accompanying documents that explained that since I am over sixty, I was being sent applications for absentee voting. My heart soared like an eagle. Blue, pink and yellow forms were there to apply for mail-in absentee ballots for the June, August and November elections.

In Missouri, a voter needs a valid excuse to absentee vote. Anne usually uses the excuse that she is an election official and I have sometimes in the past used the excuse that I would be out-of-state, on business travel. But the golden ticket is the medical excuse that includes “confinement due to illness.” I think that that fits perfectly here and apparently so does the election commission. The beauty of this excuse is that it is the only excused absence that does not require a notary. One only needs to testify to it. In the letter is the statement, “Please feel free to copy these applications for any friends or family who qualify.” I am no longer verklempt, but rather giddy with the prospects of this opportunity. I can already hear the wailing and gnashing of teeth from out-state Republicans, as the full weight of the Saint Louis electorate comes to bear in November. Here, the political game has just got real and that is the beauty of this game.

Washington politics as usual was pushed aside today, in favor of baseball, as DC celebrated its Nat’s victory in the World Series. Today in DC, it was Nats Day. People were lining up at ten for a two o’clock parade, as I headed towards my first museum. I was a bit of a piker today, compared to yesterday’s six, with only three museums. They were Air and Space, the National Art Gallery and its east wing, the I.M. Pei modern art building. My going in plan was that I would work my way up to the roof of the Pei building, which would afford me an excellent view of the parade. Unfortunately for me, ESPN had had the same idea first. I headed back down to the second floor, where I caught a view still above the street level throng. The crowd was bigger than last year in Boston and way bigger than back home, in 2011 Saint Louis. I guess 95 years will do that.

A reality check occurred last night during Game 5 of the World Series. In the third inning, images of honored vets were being flashed across the jumbotron, to the accompaniment of adoring cheers from the crowd. These cheers soon turned to boos when the camera shifted focus to the box where President Trump was seated. The boos soon turned into a chant of “Lock Him Up.” Echoing a similar chant that has been featured at many of his political rallies. A fan’s video captured a visibly crestfallen Trump, when he realized the crowd’s reaction to him. His day had begun so well too. The morning’s cheers over the killing of an ISIS terrorist leader had morphed into jeers, at the old ballgame. This was the first Major League Baseball game that he has attended, since being elected. What do you think are the chances that he’ll attend Game 6?

This incident of course rocketed to number one on Twitter. This morning, this story was goosed into a second life, when co-hosts Joe Scarborough and Mika Brzezinski, of MSNBC’s Morning Joe, tisk-tisked about the incident and all the while clutching their pearls exclaimed that real Americans don’t boo the president. Even though most of our recent presidents have also been booed at the ballpark. With impeachment looming imminently and the possibility of conviction no longer only a pipe dream, Trump finds himself cornered, with nowhere to run and no place left to hide.

Oh, somewhere in this favored land the sun is shining bright,
The band is playing somewhere, and somewhere hearts are light;
And somewhere men are laughing, and somewhere children shout,
But here is no joy in Mudville—the mighty Cardinals have struck out.

Skunked 0-4 by the Washington Nationals, the Redbirds were eliminated from playoff contention. I wish the Nats well next week in their World Series bid. It has been a long wait for DC. This outcome was foreshadowed twice this year, when we traveled to the South. First in Mississippi and then again in Virginia, we were plagued by what the locals called gnats. They are small flies that bite. Neither bug repellant or vanilla extract, which the locals swore by, deterred these pests. The NLCS makes trice that we have now been plagued by Nats.

The fallout continues from this week’s blowout 1st inning, in the Cardinals-Braves NLDS Game 5. Georgia Republicans are carping that the Braves organization’s decision to not distribute their trademark red foam tomahawks in that game, generated the “karma” that led to the Braves rout. Earlier in this series Saint Louis pitcher, Ryan Helsley, of Cherokee heritage, disparaged Atlanta’s Tomahawk Chop cheer, before Game 2 in Atlanta. “I think it’s a misrepresentation of the Cherokee people or Native Americans in general,” Helsley told the St. Louis Post-Dispatch. His complaint led the Braves to not hand out their foam tomahawks when play returned to Georgia, but it took ten unanswered Redbird runs to silence Atlanta fans and halt their performance of the Tomahawk Chop, at least for a while. Later, while railing against political correctness, Georgia conservatives cried a Trail-of-Tears, big crocodile ones, claiming that they were actually just honoring their state’s Cherokee heritage.

Well, at least Atlanta distinguished itself better this time around. Not the least, Atlanta fans did not cause a lengthy game delay by throwing trash onto the field, unlike the last time the Cardinals and Braves met in postseason play. Looking forward, Saint Louis hosts the Washington Nationals tonight. This series is for the National League pennant. I’m hoping for a good series. The Nationals should let Washington take its mind off of politics for a while and give it a chance to shine. Unlike that other crosstown franchise, who shall not be named.