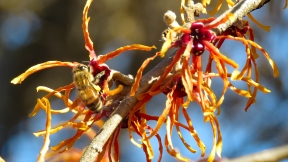 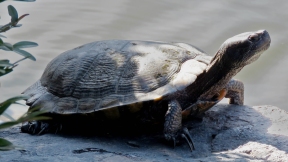 Yesterday, Punxsutawney Phil didn’t see his shadow, signaling that we will have an early spring this year. While winter isn’t supposed to be immediately over then, you wouldn’t have known it with the weather. It was a brilliantly bright day that arrived after so many cloudy ones. The mercury rose to 70 °F and I kept questioning my judgement, for not having put on shorts for the day.

We went to the gardens. The orchid show was on. Always, a mid-winter treat. Its fragrance made Anne’s nose tickle, but it was too nice a day, to tarry long inside. We walked the garden’s grounds. Almost all of the Christmas decorations have been put away and with the beds all turned for winter, there was little in the way of vegetative activity going on. Still, some of the shadows from the leafless trees were interesting and if you looked closely, one could find signs of spring. Witch Hazel blossoms are always an early indicator and seeing them was no surprise, but seeing them being pollinated by honeybees on Groundhog Day is a first. Later, in the Japanese Garden one of the turtles that live in that garden’s large pond, had pulled itself out of hibernation and was sunning itself on a rock. It was the only one we saw and was probably left wondering if it had shown up too early for the Super Bowl party.

After the garden, we headed over to South Grand. Looking for a late lunch, we ended up trying a new place, at least for us, Brazilia. They were serving a buffet, which we ended up partaking of. Our waiter came by, first with a big skewer of beef and then later with skewered pineapple. Each time he would hack the food off the skewer with a machete. We ate too much. Afterwards, we walked up and down the street, window shopping. There were many new shops to see and plenty more new restaurants yet to visit. The city’s investment in this ethnically diverse neighborhood looks to be paying big dividends.

Home again, we settled in for the night. There was no need for dinner or even Super Bowl snacks, after our large late lunch. Anne watched the Super Bowl, while I watched the Outlander series. I’m all caught up now, for this show’s new season debut, later this month. That’s the news, from Saint Louis, Illinois. 😉