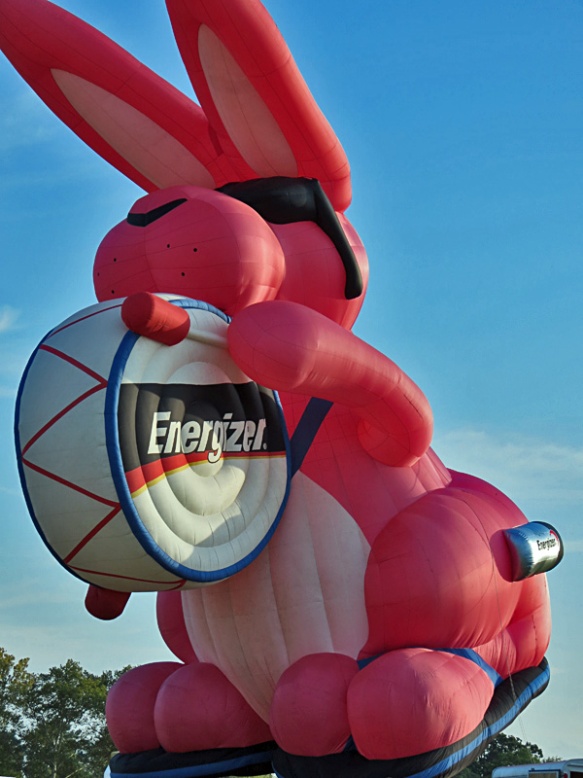 “Soft Landings” is what fellow balloonists wish their brethren on takeoff. The announcer at this year’s balloon race seemed to be making these wishes with a certain sense of urgency today. You see there was a bit of wind tonight. Balloonists really don’t like a lot of wind. They prefer to float in the sky like stately clouds of the fluffy white variety and not of the dark, ominous and angry kind that tend to roar across these prairies.

This balloon ‘race’ is really more of a game and the game is called the Hare and the Hounds. One balloon, the hare balloon inflates first. Only after it has taken off are the hounds allowed to inflate and then takeoff. Ideally and somewhat fittingly the Energizer Bunny balloon is the hare balloon, but it was too windy tonight to allow its takeoff. A conventional hot air balloon served as the substitute. The Energizer Bunny is the largest balloon in North America. It is 15’ taller than the Statue of Liberty. Each balloon carries a marker. When the hare first drops its marker, the hounds then compete to drop their markers closest to the hare’s. Normally, upwards of seventy balloons compete in this event, but this year only about fifteen launched. They all left tearing off eastward looking for some Illinois cornfield to land softly in.

In addition to their markers each balloon also carried a bottle of champagne. This is a tradition that harkens back to earliest days of ballooning. In 18th century France, the first balloonists were often set upon by pitchfork wielding peasants who believed the balloonists were demons descending from the sky. Popping a bottle of bubbly and sharing it around seemed to mollify these angry peasants and such is how traditions are born.