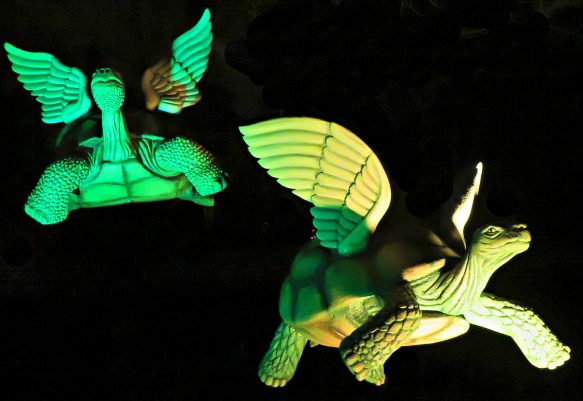 It is the new year. People want to put the old one behind them. This includes Christmas. I’ve seen trees tossed to the curb. One unfortunate had even been leaf blown over, so that it looked camouflaged, like an extra big pile of leaves. They weren’t fooling anyone, least of all the guys tasked to collect this stuff. I mean, whatever happened to the twelve days of Christmas? If you do the math, they don’t end until the sixth, Epiphany. I mean, what’s the rush? Are we really that anxious to see February? Even the serfs got all twelve off. I’m not arguing a fighting withdrawal in the war on Christmas. It just so happens that I’ve come into a treasure trove of holiday pictures. They are all of seasonal decorations at the botanical gardens and I want to use this full holiday season to share them with you. I certainly don’t want to have to wait until next year.

Joanie graciously invited us to accompany her on the garden’s last night of their Glow-fest. Unlike in past years, it wasn’t freaking cold. New for us this year was the model train exhibit, but you’ll have to wait for that. I’d spent the better part of the afternoon re-culling our 2018 photo archive for a few more acceptable pics to post. In my humble opinion, the cupboard is beginning to look bare and it is not even Lent yet. That’s why I intend to milk this new trove.

After the gardens, we adjourned to the City Diner for a late sup. We’ve eaten there often, but always for breakfast. Walking in I wondered what I would order. As it turned out, a hamburger and fries was at their limit. The service was slow, but once delivered the offered mustard and ketchup never arrived, at least in time. Nor were we asked about ordering additional drinks or even offered water refills, let alone the obligatory ask about how’s your meal, which never occurred. Confronted, the waitress complained that they were short-staffed.

Meanwhile, the next table that was seated after us, was already leaving. In anger, I stiffed her on her tip. I almost never do this and can remember when I did it last. There the waitress just ignored us in favor of more lucrative tables, in a very busy restaurant. The staff from this evening’s outing had no such excuse. The number of empty tables increased exponentially, while we sat there and it wasn’t half full when we entered. Still, I feel bad for stiffing her. She tried, just didn’t succeed. Anne had earlier asked me, what I wanted to do in this new year. I offered kind of a lame answer. Maybe, I should try to be kinder to others. It’s an epiphany that I wish had come sooner and it is in the Christmas spirit. 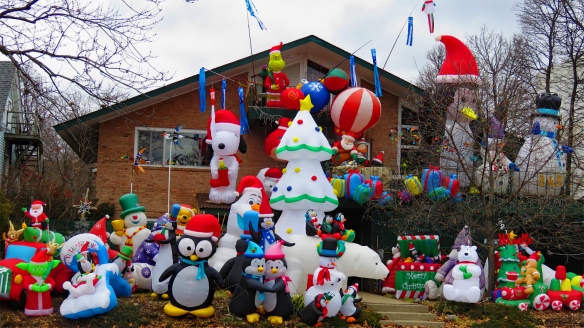 You Should See It at Night

Gone are the days when Christmas morning began before first light. I got up at nine and still beat most people out of bed. For breakfast, I fixed avocado toasted naan, over topped with lox. Coffee was spiked with Bailey’s and then chased by mimosas, making for a very merry Christmas. Presents were then exchanged, with a decidedly edible theme. Afterwards, Jane set a fire and served snacks, while the Christmas roast was in the oven. Harry out did himself for supper and now that it is done and I am full, I’m ready for a nap. The diet starts tomorrow. 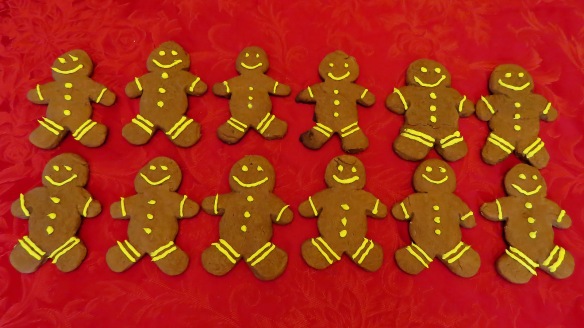 Tis the season… to go partying! Last night, we attended Anne’s seasonal social gathering for teachers at the Southtown Pub. No kids allowed. It was too loud and was difficult to hold a conversation. We didn’t stay very long. Tonight, we attend Smokin’ Joe’s Christmas cookie party. As prep I made gingerbread men to share. One of them ended up with a hot foot. The excuse for this party is to make more cookies, but for me the social aspects are the main draw. It will be good to see some of my former co-workers again and catch-up on office gossip. Every year, more and more of the attendees are retired, like me. Making such gossip increasingly rare and harder to come by.

Our holiday travel plans continue to gel. Anne and I will be driving ourselves to Ann Arbor. The boys are both flying into Detroit, which will entail multiple trips to the airport. Pickups and weather could cause some scheduling jiggle.

I continue planning and booking (as openings appear) our summer road trip. I’ve got us heading west through Denver and Vegas to Monterey. Currently, I’m working my way north along the coast, with eventual plans for San Francisco, Portland and Seattle. Then I’ll be looking at working our way east again. The big question that is yet to be decided is whether or not we first return home or go directly to the cabin. We’ll want the bikes there this year and getting them up there without first swinging home again would require some travel gymnastics, but would not be impossible to workout. I hope. 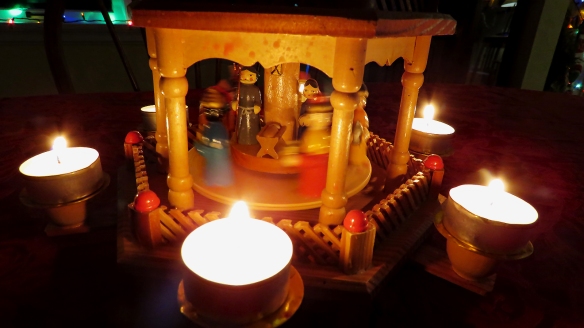 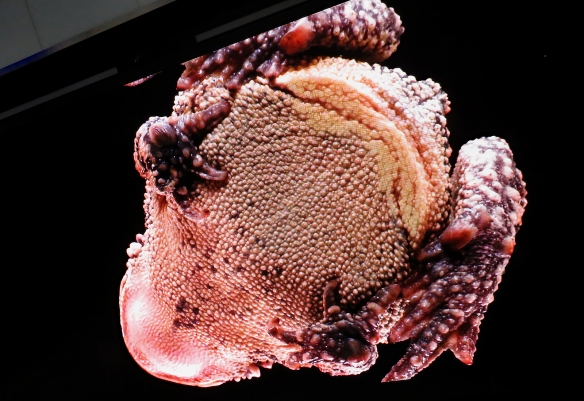 This post is the story of a blogger who goes undercover and masquerades as a smart teacher to get the inside scoop on a playboy toad and then gets tangled in some royal intrigue and ends up finding true luv or at least some warts, but how long can you keep up such a lie? “Where there’s a Tiara, there’s dirt. Trust me.”

At this point, you the reader might be asking yourself, shouldn’t this piece be about a Christmas frog? I mean in fairy-tales the princess kisses a frog not a toad and gets her charming prince. Well, not to get all Anura on you, but the whole prince-frog trope has been done so many times. Order! Order! I mean, it has gotten to be so tiresome. Let’s try to mix it up some. Shall we?

Back to the story. What we’ve got here is a legit Aldovian birther scandal. The prince, I mean toad, may have been born in Kenya, but why do all of his Aldovian relatives have British accents? If at this point, like at the beginning, you feel that you know everything that will happen in this story, don’t tell me.

This is a story of his royal hotness, at least on a summer’s day. Otherwise, even  with darting tongue, he is just sort of ambient. Still, as the leading amphibian, you find romance in the darnedest places. Just don’t drain the swamp. We need more wetlands after all. That’s enough ecological soap-boxing for now.

It is so heartwarming to see that Aldovians with disabilities has become the law of the land. Not to get all political on you again, but the acorn act has got to go. It is hardly constitutional to govern through ornamental proclamations. Ah, but a king’s reach from beyond the grave should never exceed his grasp, or what’s a parliament for? Beside big set pieces that is…

Please don’t throw me to the wolves. I had to get them in here, but truly, I have not watched A Christmas Toad or whatever you want to call it. Humbug! That’s my big reveal. I just heard on NPR that its sequel drops today and thought that it was a subject rife for derision. I hope dear reader that you have enjoyed my snark and like I asked, please don’t throw me to the wolves. They’re protected.

It’s no mystery that this post is just a puff piece. That’s not rocket science. As satire, it is not even very good theater, but still, I hope that it garners like 3,000 likes. And I admire the fact that you read my blog online, instead of anywhere else. You know who you are. And to the people who have reread this post 18 times: Who hurt you? – Net-Flics 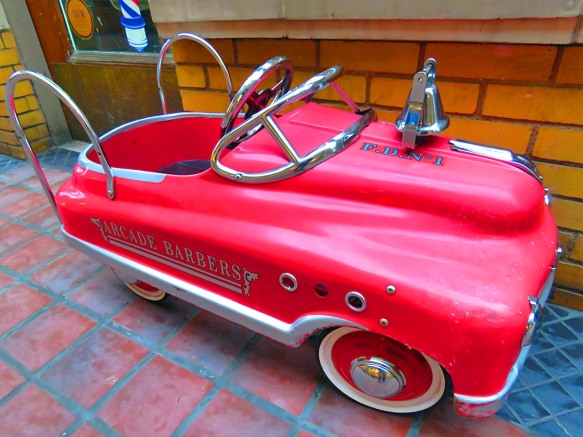 We are back in the Lou tonight, after a lovely visit with Anne’s family over the Christmas holiday. The drive home was mostly nice, except for the stretch on US-24, between Toledo and Fort Wayne. This bit of road is the latest innovation in our continual optimization of our commute to Michigan. It is a beautiful road, with brand new pavement and because it is still relatively undiscovered, low traffic. Compared with its predecessor, I-94, it is a dream or so it would seem. Maybe it is more of a nightmare? At least for us, this road has been a bit of a Jonah. We have only been using this route for a couple of years, but in that time, we’ve nearly run off the road on one occasion and been snarled in traffic for over an hour in another one. Today, US-24 offered us lake effect snow. The right lane was pretty clear and we saw multiple plows out working, but stretches of the passing lane had about an inch of snow on it. We saw one car that had spun-out and gotten turned around in the ditch. Anne called 911, but it had already been reported. She still felt good about reporting it. Once we got to Fort Wayne, the snow disappeared and it was clear sailing all the way home. It was 52 °F when we got back here. It will be good to sleep in our own bed tonight.