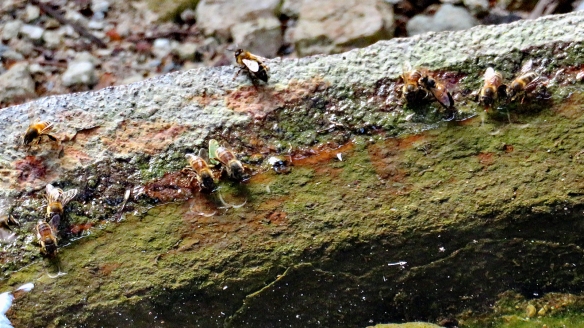 It is hard to believe that after 150 years that the pictured sugar kettle would still have any sugarcane residue on it and the bees are not just drinking rain water, but I would like to believe that there is still something left from so long ago. These bees are sipping at the lip of one of four big copper boiling pots at the Reef Bay sugar mill, which ceased operations in 1908. The sugar mill began working before the Civil War as part of a slave plantation in 1855. This mill is unique on the islands, in that it was powered by a steam engine. Most mills were powered with animal or human labor. In 2017, the hurricanes blew the mill’s roof off, before that the abandoned mill used to house Fruit bats, but now they don’t roost there anymore. 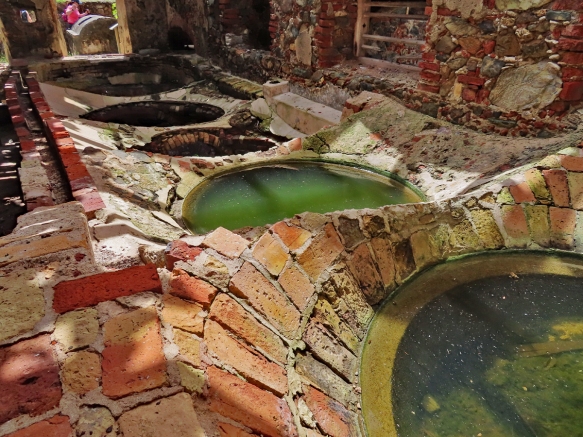 Sugarcane was refined in the mill, but only up to the point. To prevent loss to theft, the sugar was only refined into a brown paste. This paste was then shipped back to Denmark, where the refining process was completed. As part of the mill, there was also a rum distillery. Rum was primarily made for local consumption. On the islands, rum drinks were significantly cheaper than other alcohol forms, even though now, both sugar and rum are imported.

Today seems far, far away from a week ago when these photos were taken. It snowed overnight and continues to snow this morning. That’s the trouble with tropical getaways, you eventually have to come back and I think that that is harder than never having gone at all. More’s the pity for that.