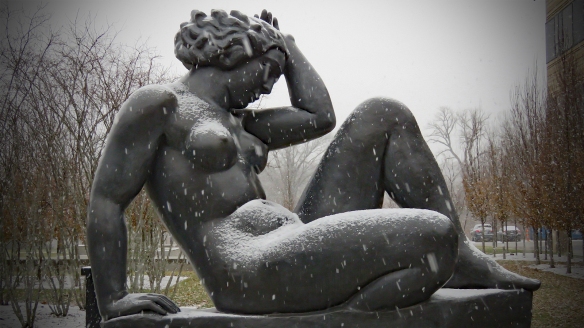 Neither rain, nor sleet nor snow shall keep our teacher lady from the swift completion of her appointed rounds. Oobleck was in the forecast, but turning on the TV elicited no school closings. The saints were definitely not marching in. In Saint Louis, the TV’s school closings crawl is so dominated with Catholic schools, it is like the song, “Oh when the saints, go marching in, I want to be in their number,” but there wasn’t even a crawl. It was already misting when I dropped Anne of at school, but it was of the liquid variety. It was still above freezing. By mid-morning it had turned to sleet and then soon to snow, as the mercury continued to plummet. At school, during reading, where Anne works one-on-one with a quarter of the class at a time, the other three-quarters soon had their faces pressed to the window, watching the white-stuff coming down. Against all reason, Anne took the class outside for recess, where against her admonition some of the kids soon started fashioning snowballs. “We are not making snowball; we’re making balls made of snow.” Sounds like flake news to me. By the time that I retrieved her, we were well beyond the forecasted 1” of snow. The car needed to be scraped and the roads were beginning to ice. The bottom in the temperature should dropout night. Maybe, the saints will march tomorrow? If so, I want to be in their number.