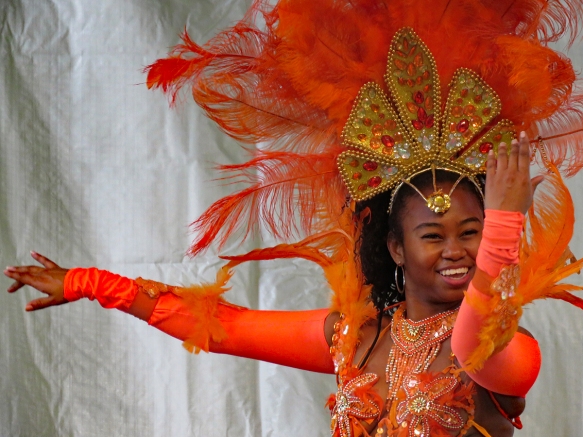 The Festival of Nations is always held at this time of year in Tower Grove Park. In the past, the weather has been abominable, usually both hot and humid. Not this year though. You couldn’t ask for better weather than today’s. Anne and I bicycled to the festival, thus avoiding its chronic parking problems. We arrived early enough to beat most of the crowd. We filled up on Jamaican BBQ rib tips that came with a side of cabbage. Properly fueled, we toured the arts and crafts booths. We saw a few things that we could have bought, but in the end, we came up empty-handed. After all of this tough shopping, we replenished ourselves with Nepalese samosas. There may not have been any heat or humidity, but there was still plenty of humanity and as the crowd closed in, we grabbed some lawn space and watched a few of the many musical acts that the festival hosts.

The first act that we saw was a Mexican mariachi band. They had all of the little kids in the audience up and dancing when they played the popular song, Baby Shark Dance, which of course Anne knew all about. Next up was a Filipino dance group. This group seemed representative of many of the performers that we’ve seen over the nineteen years that we have been going to this festival. Focused on maintaining cultural heritage amid America’s melting pot, it featured mainly children, mainly girls, who have been taught some of the ways from the old country. I especially liked what I call the candle dance. I would look it up on the festival’s website, but as you can imagine, it is being slammed now. In this dance two young women, each hold two red candles, with a third balanced on their heads. The question arose as to whether those were real candles or faux LED candles? Zooming in on one, I could see the melting candle wax which then begged the question, after each performance, do they have to pick wax out of their hair? The final act that we saw is the pictured Brazilian samba dancers. The high energy lead dancer stole the show. After them, with feet that had gone to sleep, I unsteadily got to my feet again and we stumbled back to our bikes.

With all of the rancor that is daily being spewed forth from the #RacistInChief, this day’s interlude offered a welcome relief. It felt like a balm, to see so many people, of so many nationalities, celebrating together. People of every race and ethnicity cooking and eating together, singing and dancing together and most importantly talking and being together. Love can conquer hate. So, let’s do it!

4 thoughts on “The Festival of Nations”