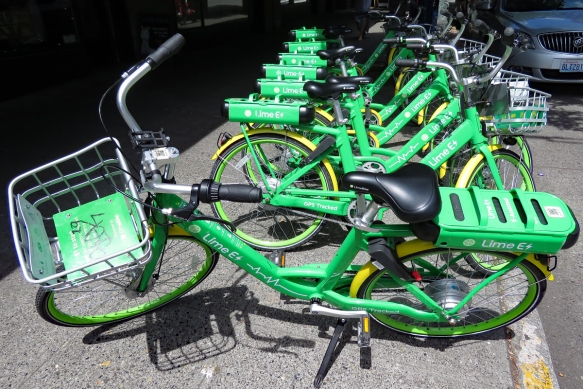 This morning, Anne went to yoga and I went for a bicycle ride. She had set an alarm and had gotten up early, while I just blithely rolled out of bed after she left. I had made arrangements to go cycling with CJ, a neighbor on the beach. When we hooked up this morning, he confirmed his willingness to still ride.

I hadn’t checked the weather, but I should have. The original plan was to ride out to the lighthouse, but when we got to the Dancing Crane coffeehouse, we heard thunder and there were dark clouds to the west. We ordered coffees, which we sipped without any great sense of urgency. I was of the mind to let the storms roll over us, while we were having coffee, but the weather wasn’t moving as fast as I had thought and after a while we grew restless and decided to take chance it and race the weather back home.

The new pavement through the Res has an extra wide bike shoulder, but only on one side of the road. We rode with the traffic on the way out, but I decided to try riding against the traffic on the way back. I found that seeing the cars come at you was disconcerting. I’m used to always riding in the direction of traffic and even though I have rearview mirror, seeing the cars come at you was a little bit scary. Especially, when some of them weaved across the line and on to our shoulder. All of this was happening while I could see ominous black clouds in my bike mirror and they were gaining on us.

We made it dry through Brimley, where we kicked the speed up a bit, but the storm finally caught us, with just a few more miles to go. It got dark and there was thunder. Most cars had their lights on, which wasn’t all that reassuring. I was just starting to feel drops, when we turned off of 6 Mile. At that point I was so relieved to be off of the road with the fast traffic that I really didn’t mind the rain anymore. Which was a good thing, because at that point the storm was beginning to pass us. It began to grow lighter, but also to rain more hard.

We both got soaked. CJ had invited me to tour his new house, which is pretty fancy, with a three-story “lighthouse” tower, but I told him that I would take a raincheck on that offer. That got a chuckle out of him. He turned off at his driveway and I continued on. When I got back to the cabin, Anne, Harry and Bubs were there to greet me. Anne had been worried about me. Really, we were pretty lucky, because after it passed over us, it blossomed into a full fledge thunderstorm, with high winds and hail. I’ve been hailed on before while biking and it is no fun at all. Those helmet vent holes that let the cooling wind pass through also let hail through too. Expecting another round of storms tonight.