Hearst Castle – It Must Be Nice To Be Rich 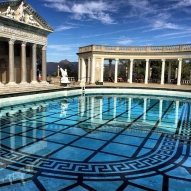 Last Sunday, Dan got out of LA for the day. He took a road trip up the coast to San Simeon, to see the Hearst Castle and then saw a whole lot of blubber at Elephant Seal Vista Point. He’s given me permission to raid his Facebook feed for some pictures for this post. He liked the castle. It’s a great site to see. You are allowed to wander the exterior grounds now by yourself. Previously, you were walked through on a guided tour. He had hoped to get some inspiration from the trip, but found the architecture and décor a bit eclectic, 3rd century tiles being paired with 15th century ceilings.

Dan felt that the guides seemed to whitewash Mr. Hearst’s legacy a bit, updating his politics to be more correct and obfuscating the role of Marion Davies, his mistress, even though her bedroom was just across the hall from his. Interestingly, Hearst stipulated in his will that only five of the thirteen corporate board members can be family. Further, these majority non-family board members have the right to name their own successors. This arrangement will endure until the last of his surviving grandchildren have passed. He was a vindictive SOB, “Rosebud.”

In other Dan news, he was apparently affected by the Glendora fire. California is on the brink of a horrific fire season, but we figured that what with living in downtown LA, Dan would be immune. We were wrong. Dan biked to work one morning, only to learn that there was a particulate air quality alert in effect. A day or so later, he developed a bit of a cough. He’s over it now, but there is still a long hot dry summer ahead.

Meanwhile, back here in the Midwest we continue to endure icy cold and worse. Anne got today off, when school was cancelled. I ended up taking a couple of hours off and skipped this morning’s awful commute. Then around lunchtime Dave texted us, there was an ongoing shooting incident at Purdue. The entire campus was in lockdown, consequently Dave had locked himself into his office. He didn’t want us to worry, if we heard about the incident on the news. An hour later, he texted us the all clear. One person was killed and another was arrested.