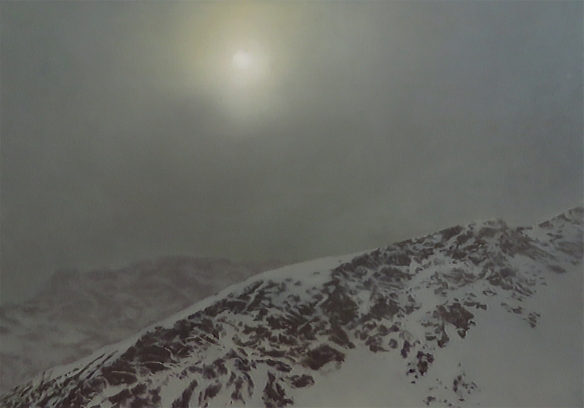 This is the picture that we woke up to today, except for the mountains. And the sun too. It was even cloudier then. There wasn’t as much snow either, but this is pretty much what it looked like. After two days of heavy rain, the winter storm Isaiah finished up precipitating on us, with a flurry of snow and a dash of crippling ice. There was hardly enough snow to worry about, but you wouldn’t have known that at the grocery store yesterday. With their undies all in a bunch, people were scurrying up and down the shopping aisles, carrying armloads of milk, bread and eggs. The TV news always reports runs on these three items, before any snowstorm. It’s a Saint Louis tradition. Still, all the hustle and bustle of the store was the highlight of the day. There was a comradery there.

The crime of armed robbery was committed in the neighborhood this week, two blocks from our house. A pizza delivery guy was attacked by four masked and armed men. They had called him to a vacant house. They got away with his wallet and he got shot in the leg. We’re pretty used to hearing this kind of story on the nightly news, but those stories always happen somewhere else, not this close to home. We live in a wealthier than some neighborhood. There are less affluent areas near by, but there are also much richer ones too. Proximity allows one neighborhood to bleed into the next. All-in-all, it seems like a lot of trouble to go to, for a four way split. How much money does a pizza guy carry anyway?

Housed at the Chicago Art Institute, Gerhard Richter’s photo-realistic color landscape painting, Davos, is based on snapshot. In it the sun is seen just burning through a layer of diffuse clouds, above a snow covered alpine peak. There are no references to any human presence, portraying only nature, both beautiful and unforgiving. I live in the city, where humanity abounds and where people too can be both beautiful and unforgiving.