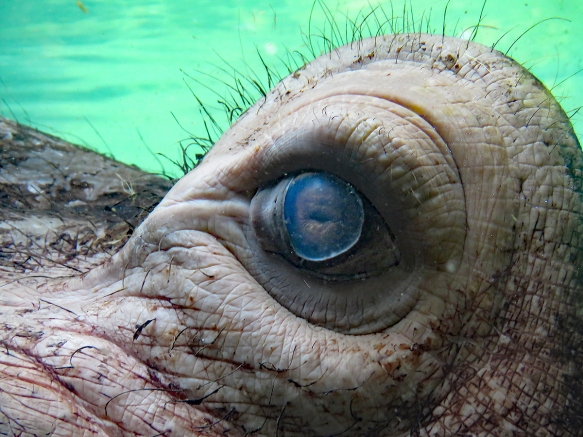 Eye-to-Eye with a Hippo

Anne went to school and I went to the zoo. There is such a shortage of substitute teachers that her half-day in the morning soon evolved into a full day, as I had expected. The zoo wasn’t very crowded and in the morning it wasn’t hot yet either. These two circumstances always make the animals both, more interesting and interested in people. One of the elephants had a ball, a big elephant sized ball that it was pushing around with its trunk, nothing but nose. Pictured is the eye of a hippo. The entire pod was sleeping underwater, while pressed against the viewing glass. I was only a couple of inches away from this hippopotamus when I took this picture. Every couple of minutes, it would open the eye and rise up to take a breath. Two young moms were joking together and one exclaimed that the hippo had Uncle Bobby’s hair. Poor Uncle Bobby. The zoo has tilapia in the water to clean up the hippo’s poop. Last time they had full grown tilapia, who not only obscured your view of the hippos, but also didn’t do all that good a job on the poop. This time they had tiny tilapia, but they had done a great job. Just something to think about the next time you order tilapia in a restaurant.

Going back to last weekend’s MS ride, I’m thinking about a conversation that I had on Friday night with the woman who was manning the bike corral, which normally doubles as the tennis courts and has very tall fences. They’re almost like a wall. Her job was to check in the rider’s bikes and make sure each bike has the rider’s bib number on it and that no one walks off with one that’s not theirs. She had a story about some guy, who apparently had a very expensive bike. He had asked her about security, but apparently wasn’t very satisfied with the answer, because he came back and locked his bike in the corral. Then he came back and put a seat cover on it. Finally, he came back one more time and took his bicycle with him. We both thought this story was hilarious and I’ve known people like this myself. Heck, I might have even been one. Saturday, we checked-out and then back in our bikes and other volunteers were working the corral. On Sunday, in the rain, but with both of our bib tags in-hand, I went to the corral to get our bikes. The gate was open and there was no one around. I looked around and couldn’t find any volunteers. Then I noticed the same red shopping bag that the woman on Friday had had. I walked out of the corral with both of our bikes. Maybe that other cyclist wasn’t as crazy as he first seemed.

3 thoughts on “Eye-to-Eye with a Hungry Hippo”