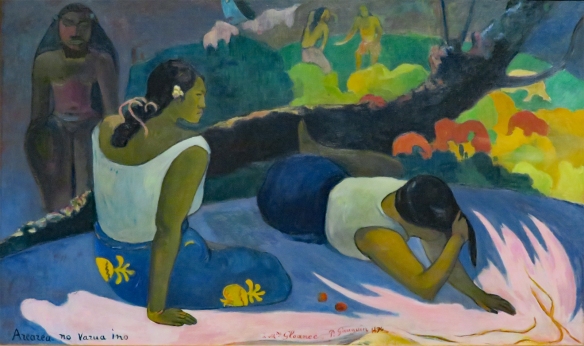 Anne had her full day cut to a half day, which was alright by her and me. We took the opportunity of a morning off to both sleep in and get in a bike ride. This combination left her pressed for time near the end of our ride, which fueled her riding to faster than normal speeds. I rode by myself yesterday and it was so much more enjoyable having her company along on this ride.

In the afternoon, I drove over to the art museum to see their signature exhibit of the summer, Paul Gauguin: The Art of Invention, before it ends next month. This show features works from the Danish museum, Ny Carlsberg Glyptotek of Copenhagen. As such, my favorite Gauguin work, By the Sea was not there, because it is at the National Gallery. The pictured painting, Reclining Tahitian Women or The Amusement of the Evil Spirit has been singled out to represent this exhibition, because it is similar to and representative of Gauguin’s most famous artwork, like By the Sea. This show though encompassed the breath of his career and contained examples of the many other art forms besides painting that he worked. These other mediums include, sculpture, pottery, wood carving and printing. It was interesting to see his many varied means of expression.