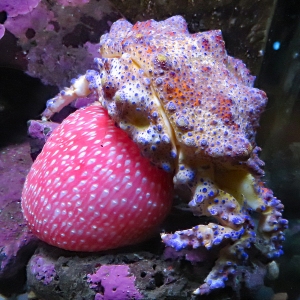 Carl and I were watching the pictured scene, but it took us both a while to comprehend what was going on. It’s not normal for one aquarium specimen to be eating another one. Maybe in the wild, but not here. It’s bad for the collection for one. After watching for a few minutes there could only be one conclusion, the crab was eating the anemone. I suppose that at some level the anemone minded being eaten, but that was what was so surreal about the whole tableaux, because if the anemone did mind, it certainly showed no outward sign of it. I think that it was still alive and if a keeper had come by, it probably could have been saved, but there was no rescue coming for it.

A neighboring cabin came calling last night. They had guests and wanted to show them what the old cabin looks like. It is a log cabin that was built in 1924. A great deal of time was spent explaining the cabin’s history and describing how its appearance has evolved over time. It was a nice little social encounter. Afterwards, Bubs was saying that the guests would probably never understand what the cabin had once looked like, because it was do different back then. It was once a world lit only by fire. The introduction of electricity changed so much. It felt like she was mourning the passing of a way of life that once meant so much to her, but now is no more.

On another whole level, I was reminded of a childhood conversation between our two sons. They were both still quite young. Friends had gifted us a TV set. It wasn’t much, black-and-white only, but it worked and it broke the moratorium that we had had regarding television. We eventually upgraded with our own set and now own a plethora of screens. The gist of the conversation was that Dan the older was telling his younger brother how much tougher he had had it, because when he was Dave’s age there had been no TV in the house. The difference in their relative ages were more pronounced then than now. Now, Dave is likely to give Dan a bit more pushback for any assertion like that.

Enough about the past. The boys have arrived. The future is here. Signing off.

2 thoughts on “A Pretty Death”