After this weeks total solar eclipse experience, I decided to review my photos from last month’s aurora borealis display. The top picture was the first one taken on that night and the bottom one was the last. The first one has already been published, but I reprocessed it to make the purple colored northern lights even more distinct. This picture was taken not too long after sunset and you can still see the sun’s afterglow below the plasma curtain. The following photograph has not been published though. It was taken near midnight, so the sun’s afterglow had set, but you can see a distinctive yellow band on the horizon. This was my last shot for the night and by then we were tired, cold and at the time I thought that it was just fog coming off of Lake Superior. Although, I have never seen glowing fog before or since. I must have been tired. When we were looking at the aurora that night, its presence to the naked eye is not very distinct. We might not have even seen it at first and taken the above pic had not another man, with better eyes than I, seen it first and called it out. I was taking 15″ exposures, so the aurora was much more distinct on the camera’s screen than it was in the sky. Subsequent use of Photoshop only served to enhance the pictures. I changed my mind on the below photo, after I later saw a news photo with the same yellow band over the Mackinac Bridge. I can only wonder what we would have seen, if we had persisted and stayed there longer. 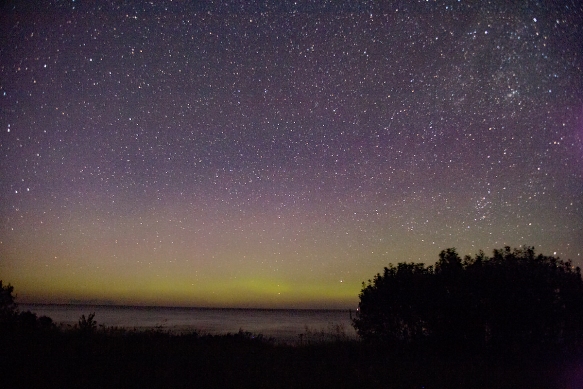