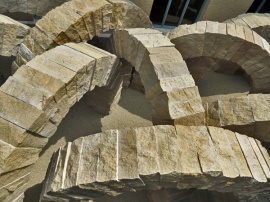 Stone Sea – Looking down on it 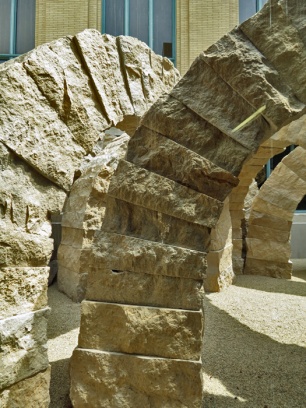 Stone Sea – Looking through it

Stone Sea is a site-specific artwork commission that was created by world-renowned British sculptor Andy Goldsworthy. The work unveiled to the public at the June grand opening of the Saint Louis Art Museum’s new wing. Stone Sea was inspired by Saint Louis geology and the city’s underlying base of limestone, which was formed over 300 million years ago when the Midwest was once covered by Ocean Sea. Using limestone from a local quarry, Goldsworthy fabricated twenty-six arches, each about ten feet high. The arches are densely nestled in the courtyard adjoining the Main and new East buildings. The arches, made of roughly cut stone, produce a sense of fluidity reminiscent of the sea. According to the museum, Stone Sea looks to the past, present, and future to celebrate the expansion of the Museum. It brings together many of the artist’s key themes and goals: commitment to the arch form, exploration of enclosed spaces, merging of outside and inside, investigation of local material, and finally, connecting of people and place.

Stone Sea is the largest, most significant art piece incorporated into the grand opening of the East Wing. It’s correlation with Saint Louis goes beyond the choice of its limestone. The choice of the arch shape is a hat tip to that most emblematic of Saint Louis symbols, the Gateway Arch. The Arch permeates Saint Louis society to such an extent that a group of Maplewood hipster moms came out with a line of t-shirts with the phrase, “Stick an Arch on It”. This phrase is itself a riff off the Portlandia TV show’s sketch, “Stick a Bird on It”.