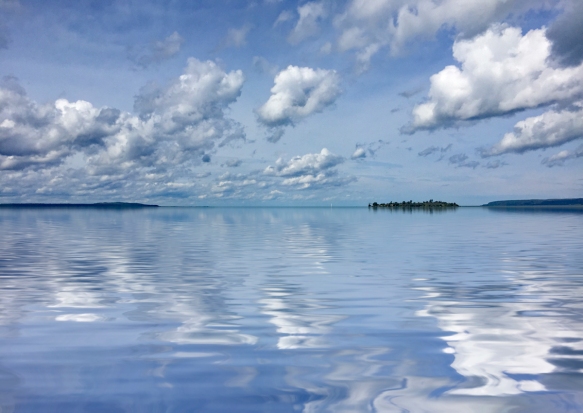 It was one of those days that kind of got away from me. Anne got up first and made coffee. Yeah! I snuggled under the covers as long as I could. It was cold out. I eventually did get up, put on big boy pants, shoes and socks. In the kitchen, Anne made blueberry muffins and I fired up the wood stove for the first time this summer. Between the oven and the stove things soon turned toasty.

This was our first stove fire of the summer and only our fourth fire altogether. Even so, the woodpile is looking a little low. Anne contacted our wood supplier, who queued us up a delivery. I’ve been using a lot of the birch that fell earlier this year and that we cut up. It burns fine and feels like burning free fire to me.

I did a Shipt order, but when I got back to the cabin, everyone had decamped to the beach. It was a beach day, with a strong offshore breeze. After, I got the groceries put away, I joined them down there too. Anne and I set off to walk the beach. We walked down the short-end and got as far as Jan and Pete’s who entertained us on their deck. A multitude of woodland creatures also appeared as part of their floor show. At three, we broke off and headed home for a late lunch.

Our beachy afternoon, was interrupted by a brief shower. A late afternoon snack pushed dinner to later. I called my dad, who has recovered from his fire scare. He has unpacked all his fine art from the getaway car and the air is breathable.

Dan and Britt did some more drone flying, while we watched the sunset. The pre-sunset was much better than the actual one. I got the night off from the kitchen as Britt made us all dinner. She fixed pesto pasta with a spinach salad. It was really good. That about sums up the day. 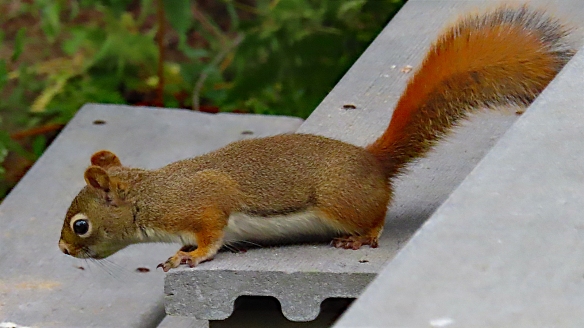 Oh no, Mister Red T Rodent Es-squirrel has reappeared inside the cabin. Dan first heard its scratches and then Britt spotted it in the loft. Our crack rodent control team (read Anne) sprung into action and was able to drive it away, but I’m sure that it will be back. Stay tuned for more detail of this saga in the future and I was getting worried that I would be running out of blog fodder.

This morning, I got up first and then made the coffee. I made another fire in the wood stove, but this time I had more difficulty getting it going and the kitchen got a little smoky. I didn’t think it was that bad, but Anne did. Dan got a call from the union. They are starting up again in NYC. I hope that he gets on Mrs. Maisel, because then I can try to wheedle info about its next season out of him, but I’m sure he won’t divulge anything to me.

2 thoughts on “Upon Calm Reflection”