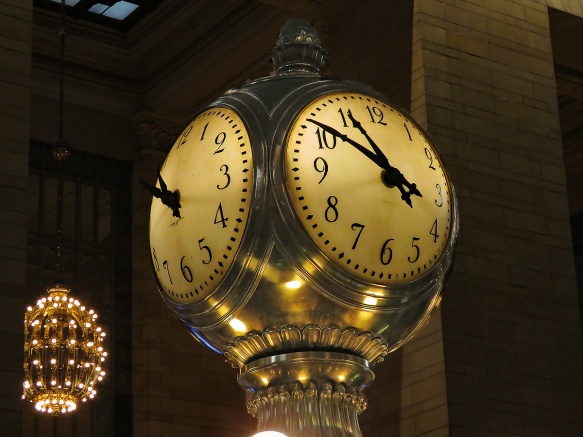 After my recent spate of NYC-centric posts, I recounted to Dan a story of our most recent visit to Grand Central Terminal. This was last year; Anne and I were touring Manhattan. Dan was at work. We came upon Grand Central while walking about midtown and since we were taking Amtrak to Boston the next day, we figured that it would be a good idea to checkout where exactly in this huge edifice we should be going tomorrow. We looked around inside. The place was a hive of activity, with commuter rails of various flavors going every which way, but no Amtrak. Finally, we asked someone, where is Amtrak? This question evoked a horrified expression from the attendant, because Amtrak isn’t at Grand Central, but is across town at Penn Station. We comforted the attendant, explaining that we weren’t taking the train today, but that this would be good to know for tomorrow. In true New Yorker fashion Dan said, “That’s right, New Yorkers hog the good terminal for themselves and make all of the out-of-towners use the other one.”

Tonight, all eyes will turn to New York City, specifically Times Square, for the New Year’s countdown. Come midnight (or eleven local), the ball will drop, signaling the beginning of a new year, a new decade. Accompanying this milestone, a certain maudlin song will be sung, the many tooting of party horns and maybe a kiss or two, if we’re still up. Here, an hour later, this process will be repeated. This time, with the muted rumblings of fireworks being set off somewhere outside. A new year, a new decade, what will the future bring? Hopefully, some joy to leaven the inevitable sorrow.

I’ve already published my New Year’s header of silent, but endlessly repeating fireworks and queued a post for the morning. The complication of scheduling ahead into a new month was further complicated by the new year. It seems like I am rushing through the holidays. Yesterday, I took down our rather desiccated and by then quite fragrant-less boughs, which evoked a tsk-tsk comment from Dan about taking down decorations before New Year’s. I know, I know, but it was time. Out with the old, in with the new, that’s what I say. Happy New Year!