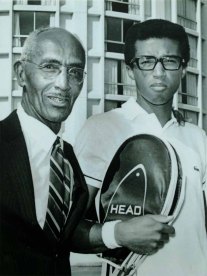 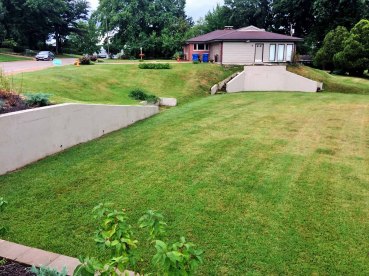 This last week Naomi Osaka defeated Serena Williams, winning the US Open, but most headlines centered on the fireworks between Williams and Umpire Carlos Ramos. Ramos issued Williams multiple penalties, contributing to the loss of what would have been her 8th US Open title. Calls of racism and sexism erupted. None of which is new to the US Open. Fifty years ago in 1968, Arthur Ashe (1943-1993) overcame tennis racism and became the first black man to win the Open. Here is a local Saint Louis connection to his story.

In 1961, Ashe was a high school senior, who moved to Saint Louis to continue the development of his game. A few blocks away, he spent his senior year living with Richard Hudlin (1898-1976), a Sumner High School coach. Ashe practiced tennis on a court at the Hudlin residence, the remains of which still exist. Ashe wasn’t the first protégé that Hudlin coached. He also mentored Althea Gibson, the first African-American woman to win a Grand Slam title. She won the French Open (1956) and Wimbledon (1957 & 1958). Ashe was also the first African-American man to win Wimbledon (1975). Mr. Hudlin died one year later, after attending that match as a guest of Mr. Ashe. Arthur Ashe died at the age of 49 from complications of AIDS, which he had contracted from a blood transfusion that he was given during open heart surgery. Ashe is most famously remembered by the US Open, which is played now in Arthur Ashe Stadium.

On the parking strip at the intersection of Laclede Station Road and Bennett Avenue the city of Richmond Heights has recently erected a monument to this locality’s moment in history. It is a simple affair, consisting of a plaque that overlooks the remains of the Hudlin tennis court, a park bench and some shrubbery. It also commemorates the Bennett Avenue Historic District. This historically black neighborhood was founded in the early 1950s. This district was built in the historical entity, Hadley Township, which was founded in 1907 as a company town for a brickworks that built homes for its employees. Because of segregation, it was one of few places blacks could live in the county.