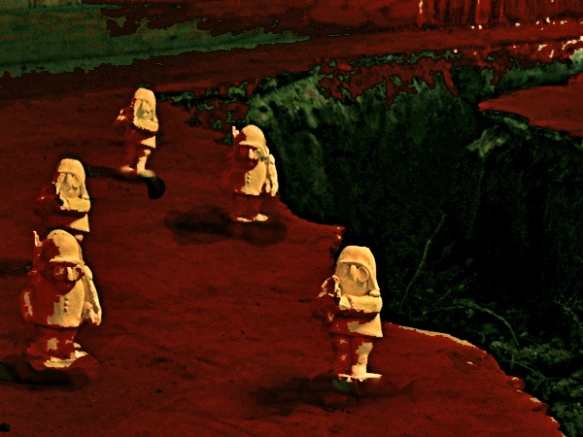 Tuesday was a rainy day. Too rainy even for a “walk the engineer” lunchtime stroll. This limited the amount of work that the plumbers could do. They finished digging out the basement and it was too wet to start digging outside. Rain is also forecasted for Friday. This weather may delay work completion until next week. That’s OK, so long as service is not interrupted over the weekend.

I read an article today that talked about the US Navy’s plans for ‘directed energy’ weapons, what I’ll call lasers. The admiral in charge of the Office of Naval Research (ONR) predicted that within two-years the Navy would start fielding lasers onboard their ships. These weapons would be used to defend our nation’s warships from cruise missiles and aerial drones. ONR said that the major sticking point is determining how to best regulate the competing needs for power, from power for maneuvering the ship and power for firing the weapon(s). Unfortunately, the USS Enterprise is slated for retirement next year. At 51 years of service, it is the longest-serving aircraft carrier in the Navy. The USS Gerald R. Ford is slated to take its place in the fleet. This is unfortunate, because the following line of dialog will have to remain fiction, “Scotty, I need more power!”

As you read this post, I’m girding my loins for another day of battle, I mean work. Soon, I’ll hop, skip and jump. I’ll hop into my car, skip over to Starbucks and then jump to work. No matter how early I arrive, everybody there will already be in a freaking panic. I’ll settle in, dig in and proceed to make my paper airplanes. Once, I have my day’s arsenal prepared, I’ll lie in wait and then proceed to launch them one-by-one at my unsuspecting co-workers. This always sends them into a panic, making this post’s title a truism. I just hope that I don’t poke anyone’s eye out.