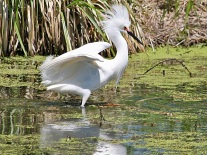 Anne on a Yellow Field

I was rummaging through old photos on the laptop, when I found the directory that I was working in, when for last Christmas, I made this year’s calendar. There were a lot of other photographs there that had not made the cut. Some of them didn’t make the cut, because they were not the right shape. The requirements of the calendar were for photographs that were four-by-three and not three-by-four. Some didn’t make it, because there were already too many similar photos in the mix, like too many bird pictures, or too many pictures of Anne (In Anne’s opinion). Finally, some didn’t make it, because there were better pictures to choose from, but they were still good photos, at least in my humble opinion. To this end, I give you last year’s also rans.

1 thought on “The Also Rans”