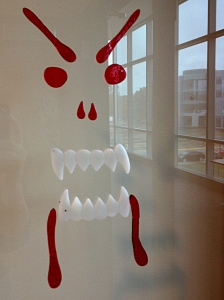 Harry, has for all that I have known him carries a 3” by 5” index card in his front shirt pocket. He calls it his mind, which when sometimes he misplaces it, we all joke that Harry has lost his mind. It is full of his to do and shopping lists and jotted down things to remember. For five years now, I’ve carried an iPhone in my pocket. Friends and fellow iPhone users call these handy little devices our hand brains, and because they are so good at thoughtfully informing our increasingly aged head brains, it is a wonder now that we could ever have existed without them.

In addition to my hand brain, I also carry my version of Harry’s mind, an index card. So, you could say that I am always of two minds. I do this, because work rules prohibit bring the iPhone into the office, so the old analog method persists. Someday though, the necessity for this dual brain system will disappear and my stack of unused index cards will cease to diminish and begin to gather dust and I will rely totally on my iPhone.

We picked the perfect week for our air-conditioner to die. Monday, Anne texted me, “Das AC is Kaput!” A serviceman had just tried to get it running again, but it appears that the compressor had locked-up. This is always a fatal condition for AC units. This pronouncement launched a frantic campaign to get a new unit installed, hopefully before the mercury climbs this weekend. We are currently enjoying a spate of nice weather. We had three contractors come by and bid, picked one, the same outfit that just did our furnace and then scheduled the install for Thursday. So far, the weatherman has been cool with all this.

“You have to get angry, you have to be MEAN! (Hits Gordon in the balls) You angry now?” – Patches O’Houlihan, Dodgeball

Well, since I’ve trotted out my mean face for this post, I better deliver. Actually, it is Dave’s mean face photo, but I stole it fair and square. Is that mean enough? No, I didn’t think so either. I don’t want to be mean to anyone who might actually read this post, so keep reading folks, because the minute this blog drops off your radar screen that’s when I’ll strike. Threatening the readers, that’s a little bit mean. I could be mean to some of the people at work, at least the ones that don’t read this blog, but lately, I don’t have much to be mean about. Frankly, with every passing day, they seem more and more irrelevant.

I know, Dennis Hastert, politician turned lobbyist, now revealed as a pedophile, I can get my mean on with him, except that the only crime that he has been charged with is trying to circumvent government surveillance. Hello, Uncle Sam, the Patriot Act was so last Sunday. I got it, FIFA President Sepp Blatter, I know I can be mean to him. What a scumbag. While, his house is burning around him, he gets himself reelected and then announces his resignation, but then forgets to name the date. Except that I’m an American, what do I care about soccer? Sorry, Carl, Jay, Rey and all you other readers. I just don’t feel like being really mean today. It is a waste of a great picture though. I guess that when I sat down to write this post, I really was of two minds. Wait, wait, I have an idea. I could recycle this photo whenever I do feel like being mean, then my mean could become a meme.