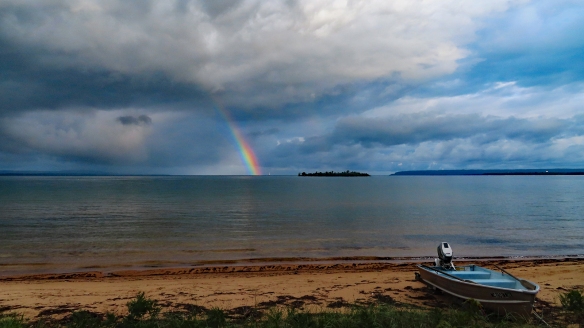 Rainbow on the Horizon

We survived yesterday’s storm intact. Wind and waves couldn’t beat us back. Usually, rainbows appear after the storm has passed, but this time it preceded it. In the morning the weather wasn’t too rough, but as the afternoon wore on, the wind kept rising. It eventually reached such a fever pitch that the cabin seemed to shake. Certainly, not a good day to fly a drone. The center of the low was north of us, near Wawa and it radiated thin pinwheel spokes of squall lines that rotated around the low and kept sweeping over us all day long. We once headed out to walk the beach when the sun came out, but got caught by one of these squall lines and had to cut our walk short. Later, we ventured out again, but kept a weather eye out for the next one and were able to get back before it struck that time. Eventually, the pictured placid scene was transformed into a roiling sea. Waves crashed across the width of the beach. The little boat shown above was washed off of its rollers. So, not a very good beach day, but since we made it to the beach, still a beach day.

Below, is a short video clip that Dan and Britt have created. This is the first one that they’ve published. They had shot it the day before, when it was still calm. It then took them most of the day to figure out how to do the processing of the film using Adobe Premier. It shows a flyby of the 19th-century lighthouse keepers place, which is still standing down the beach. Today, they went to Raco, an old Cold war era military airfield nearby. They were practicing maneuvering the drone across the open tarmac.

7 thoughts on “Blow the Man Down”