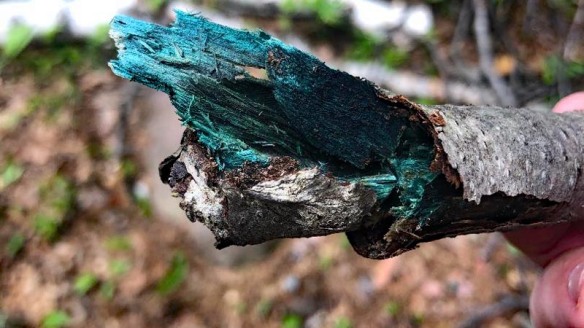 Dan and Brit are at the cabin and Dave and Maren will join them today. Dan is discovering all sorts of interesting things… There is a squirrel in the loft that has left pine cone bits on the stairs and new to me at least, bumblebees are flying into the cabin. There are mouse turds, but no signs of a mouse yet—cabin living.

Dan has broken out the Have-a-Heart trap for the red squirrel and baited it with peanut butter, but after the first round, it’s squirrel one and Dan nothing, after the bait was stolen without triggering the trap. The bees seem to be coming inside in the corner of the sleeping porch above the bed. Dan has stuffed some wadded up plastic in the hole for the time being. When I get there, I’ll look at it.

The Blue Stain also-known-as Sap Stain, because it grows in the sap wood of trees is caused by a fungus. According to the Northern Outdoorsman, this stuff is the bane of loggers and is one of the main reasons that they prefer to work in the colder months and I always thought it was because of the bugs. As in this case, if a tree is felled in the summertime, like from of storm damage, the freshly cut logs are quickly invaded by one of the many species of fungus that leave bluish streaks in the wood and that dramatically lower the value of any lumber that is sawed from that wood. It is a pretty color though.

Dave and Maren visited with Harry and Jane yesterday. They brought gifts of chocolate and wine from the Finger Lakes, making them welcome anytime. The wine was for Jane, to thank her for all that she has done to get the cabin ready. Maren and Dave overnighted in Bay City and should be at the cabin by now.