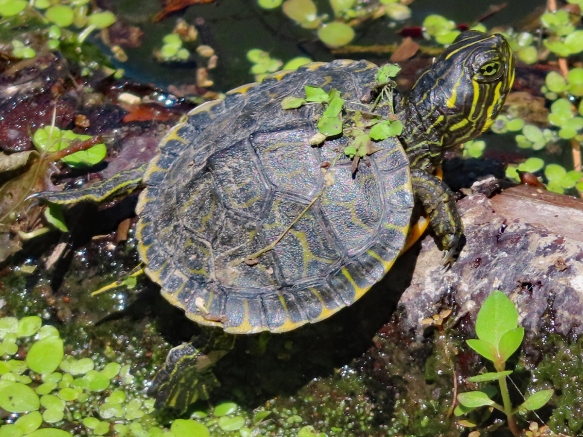 With the reopening of the Saint Louis Zoo, the road closures that we have come to know and love have gone bye-bye, but new road closures in the eastern half of Forest Park have been added to generally keep the amount of pedestrian only walking fare about the same. Yesterday, we tried out this new walking area. It is not as shady as the old road closures were which will make it less desirable on hot summer days, but we did take advantage of being near some of the lagoons that dot this corner of the park. While not strictly part of the dual path bike trail, there is a trail that we frequently visit while cycling in the park. On this path are two boardwalks, from which wildlife can often be seen.

On this day, we watched a Great White egret as it went about its daily business of fishing. We saw a muskrat, but it was too fast to photograph. Our best capture of the day was of this pictured Painted turtle. It was sunning itself directly below the boardwalk and didn’t get frightened off by all of the paparazzi activity going on over its head. I estimate that its shell was about two inches in diameter and would have make a lovely meal for that egret, except for the hovering paparazzi.