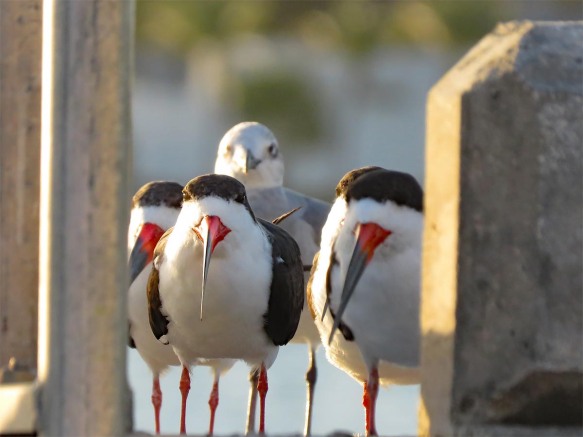 Last night, Jay organized a Zoom conference call with her sisters and they were gracious enough to allow Carl and I to Zoom-bomb their call. I don’t know if they had had any agenda or not, but that kind of went out-the-window once the boys arrived. The Zoom conference went on for quite a while, much longer than the free forty minutes that was promised. It was interesting seeing the ambient light across four time zones, Jane in the Eastern, us in Central and Jay and Carl in the Western. By call’s end, it was dark in every scene, save the one out west.

One topic of conversation was Michigan’s weather. Jane was expecting snow overnight. This was a problem on multiple fronts. First, she has Friday off and who wants crappy weather on your day off. Second, today is recycling day and she didn’t feel like getting dressed just to take out the trash. I suggested doing it barefoot and explained that I routinely get the paper in the snow that way. This morning, Jane texted Anne a photo of her bare foot seemingly about to plant itself in the new fallen snow, but I’m unsure if it went much further than that. She is much too sensible a person for that kind of behavior.

Yesterday, the Missouri governor officially closed all in-school sessions in the state, for the rest of this school year. Today, we were treated to a parade. All of the school buses, plus a gaggle of fire engines, ambulances and police cars came parading by the house and by way of a send off for this now abbreviated school year. The parade was rather short and sweet, but it is the thought that counts. The kids still have online classes to take, but Anne is now off for the school year. Coincidently, she received a paycheck today from Kelly Services, her employer of record. She has not taught in weeks, so its arrival was a bit of a mystery. Anne later decided that they were just settling up for the year and they owed her a little extra money.

Finally, the water company is back. I knew that they just couldn’t stay away. The fire hydrant, right across the street is being replaced. Just one of the loose ends that needed to be tied up. Hopefully, they can finish this job today and then be gone again, if not for good, then at least for a good long while. We’ll have to see. Anyway, it makes for a good floor show while the work lasts.