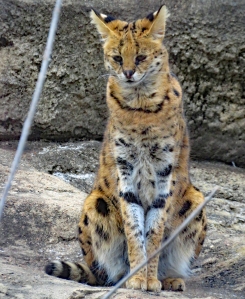 Anne, the kids and I went to the zoo. As per usual, we got a late start and eventually ended up closing the place. Although the holiday lights display is still up that festival is now over. It was a gray day and with winter’s early dusk, low light photography proved difficult. Still, I got a few good shots. The zoo officially closes at five. By then it was too dark to take pictures.

It was interesting being in the zoo at this crepuscular hour. Normally, I’m there in the morning. Most of the animals were anxiously awaiting dinner. We looked away for just a moment and all of the zebras had disappeared inside their building. All of the big cats were on the prowl. Some animals who sleep all day were up and moving around, like the hyenas, but by the time we were asked to leave, most of the animals had already gone inside for the night.

After the zoo, we went to Blueberry Hill, where I got to practice my parallel parking skills, in the new SUV. After dinner we all retired to the couch and plowed through the first half of the second season of Mrs. Maisel. We got to see that show’s department store switchboard prop in action that Dan had told us about. It being a school night, we all too soon called it quits.

Looking out our bedroom window, Anne was first to spy movement on our back porch. We thought that it was a cat. They frequently like to sun themselves there. It offers an excellent view of the bird feeders. Although, I should point out that there was no sun at that hour. I flipped on the porch light, revealing not one, not cats, but two muskrats. We all looked at them, while they looked back at us. I tried a photo, but it was too dark and there were too many heads in the way.

This morning, recounting that encounter, Anne launched into singing Strangers in the Night, but with her own lyrics. Maybe instead of, Strangers in the night, exchanging glances, wandering the night, what were the chances. I was thinking it would be better to go with, Muskrat Suzie, Muskrat Sam… Muskrat Love.

2 thoughts on “Strangers in the Night”