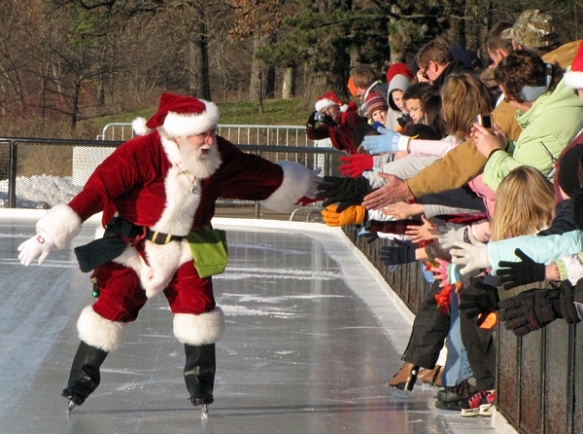 On Saturday, Anne got all of her holiday shopping done and I helped. I was her chauffer and drove her about town. This spree followed Fun Friday the 13th when inexplicably all the items that I had been ordering for a week showed up simultaneously on our doorstep. A novel take on Amazon’s one-day delivery. This was that one day.

I was sufficiently vigilant to fend off the threat of porch pirates. Either that or we just live in a nice neighborhood. Or maybe porch pirates, like pirates of yore are more to be feared than found in real life. One of those faceless threats that are best served up to compel children not to be naughty.

I think that we’re done shopping: ‘Twas the week before Christmas and all through the house mountains of presents lie strewn about. Our credit card balances are bursting at their seams, with daily reminders of our excess, with each new ding. I hope that St. Nick will soon get here, I’d offer him a beer.

It has started to snow, but we have places to go. The next-door neighbor kids have a Rock School concert that we would like to attend. It’s to be held downstairs in the Duck Room at Blueberry Hill. Best school concert venue that I’ve ever heard of. I once entertained business associates on the main floor above the Duck Room. There was a real rock band concert underway beneath our feet, which we could both feel and hear, but could not hear much else.

Time to take the new car for a spin and hope for a win-win. Saint Louis has a love-hate relationship with snow. We “enjoy” northern winters, to complement our southern summers, but being a northern city in a southern state there a lot of drivers around here that can’t handle the snow. People have been talking about this storm for days, but like most snowstorms around here, it will probably be a bust. Famously, Saint Louisans will strip the grocery aisles bare of bread and milk on the approach of such a storm, but being in the heat of the Christmas rush, I guess that they have been too busy to do that this time. I hope that they’re not still out-and-about doing Xmas shopping. Wish us luck!