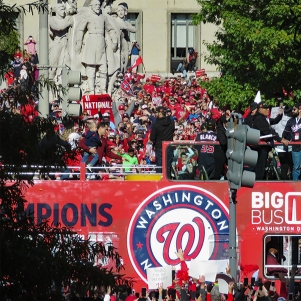 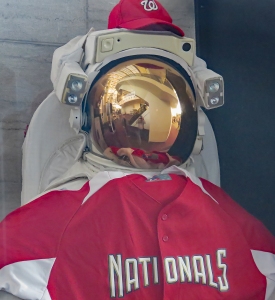 Washington politics as usual was pushed aside today, in favor of baseball, as DC celebrated its Nat’s victory in the World Series. Today in DC, it was Nats Day. People were lining up at ten for a two o’clock parade, as I headed towards my first museum. I was a bit of a piker today, compared to yesterday’s six, with only three museums. They were Air and Space, the National Art Gallery and its east wing, the I.M. Pei modern art building. My going in plan was that I would work my way up to the roof of the Pei building, which would afford me an excellent view of the parade. Unfortunately for me, ESPN had had the same idea first. I headed back down to the second floor, where I caught a view still above the street level throng. The crowd was bigger than last year in Boston and way bigger than back home, in 2011 Saint Louis. I guess 95 years will do that.