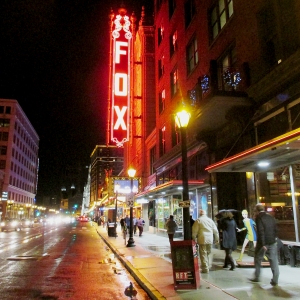 Outside the Fabulous Fox

What began by accident quickly snowballs out of control. High School is frequently like that. If you are shy, then the advent of sudden fame can be disorienting. The musical Dear Evan Hansen is captivating. Like a slow motion train wreck, you cannot look away. It speeds onward towards disaster, but in the lulls leading to its end, never have I heard so many people verklempt.

Dear Evan Hansen gets its title from the opening salutation of a self-help letter that the title character daily writes to himself. Connor Murphy, an even more troubled youth pulls this letter off the printer, reads it and proceeds to tease Evan about its voiced feelings towards Connor’s sister Zoe. Evan has a secret crush on her. Connor stuffs the letter in his pocket and then noticing that no one has signed the cast on Evan’s broken arm, signs his name in big block letters. His damage done, Connor storms away and later we learn that he has killed himself.

Finding the letter, Connor’s parents assume that it was written by their son to Evan. They come to school, hoping for an explanation about their son’s death. Interviewing a stammering Evan, they implore him for some news, some help, some hope that their son was not as alienated as he seemed to them. Sensing the Murphy’s need, Evan tries to help, by not telling them the truth. One thing leads to another. Add a fake email chain, a moving eulogy that goes viral and the lies pile on top of one another. Spiraling out of control, Evan feels trapped, but in a gilded cage. The Murphy family is well-to-do. Filling the void left by Connor, they invite Evan into their family and offer him a home life that he doesn’t have and then there is Zoe too. At intermission, there is no path for Evan, but down. Don’t worry though, because with six Tony awards, including Best Musical, the second act of Dear Evan Hansen is a journey worth taking.