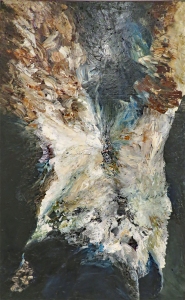 Yesterday, was Annunciation Day, but our local aficionado Harry was totally underwhelmed with this example from the Contemporary wing of the Chicago Art Institute. I can’t sat that I really blame him though. I, like him, really prefer my art to be a little bit more figurative.

In other art news, Dan announced that he has been working the set of the hit TV series The Marvelous Mrs. Maisel. This show is about a 1950s NYC housewife, who decides to become a stand-up comic. It’s won lots of awards. I haven’t seen it, but then neither has he. Maybe he’ll watch some of it now? Maybe not?

We flew back from Michigan and I am already missing Amtrak, even with its five-hour delays. Uber Jane got to the airport on time, but only just. We were not TSA Pre and had to slog through security, which seemed especially intrusive. We were both singled out for special attention. Could you please turn your head and cough? We made our flight, which was at the end of the concourse, more steps, since the tram was inoperable. We squeezed into an aluminum tube for an hour-and-a-half and eventually landed in Saint Louis. Our cabbie hugged us, when we got home and he saw our sign welcoming diversity. It offers a neighborly message in English, Spanish and Arabic. He read the Arabic aloud.

The painters/plasters have finished their work. It looks great. We showed it off to our next door neighbor Caroline, who was suitably impressed. We got the bed made and then called it quits for the day. It has certainly been an eventful one, beginning with breakfast at the Fleetwood, with Bill and Jane.